Facebook, the popular service most use and many who do wish they didn’t have to, is adding a new optional feature that will be sure to raise some privacy concerns, even though it is one of the few major changes Facebook has rolled out that is optional or opt-in. The new feature is called Nearby Friends. Essentially Nearby Friends allows you and your friends, who also must opt-in to the service, to monitor respective locations whether stationary or on the go. Facebook’s idea is to enable you and your friends to more easily meet up to share experiences face to face without having to check into a location. 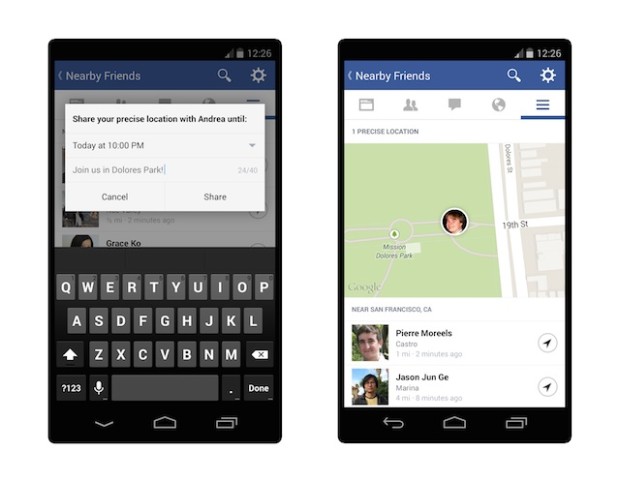 The new service will be rolling out over the next few weeks to iOS and Android devices and not all users will see it at the same time. To turn the location service on, users will have to goto the More section of their settings and locate and turn on Nearby Friends.

Nearby Friends is the first significant new feature that Facebook is launching this year after much of its news has been about the acquisition of other companies such as WhatsApp and Oculus Rift, and the separating out of some features into other Apps like Facebook Messenger and Paper.

Facebook is obviously sensitive to the potential privacy issues that a service like this could raise. On the blog post announcing the service the title is Introducing A New Optional Feature Called Nearby Friends. Even with careful messaging privacy skeptics will cast a careful glance.

Nearby Friends allows you to make a direct connection with your friends in ways that have not been possible with Facebook before. It works like this. 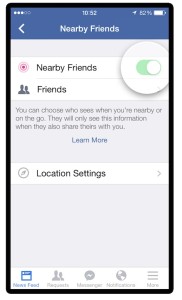 Once a user enables Nearby Friends he or she can view the location of friends who also have the feature enabled. Users must be over 18 to use the feature. A user can see what city and neighborhood a friend is or was in, how long ago their friend was at that location, and the distance between them. From there they have the option to message or call the friend to make plans. Or presumably just follow the friend’s journey.

Facebook has brings a number of restrictions to the table for the feature. These include being able to determine which friends can see you by choosing among lists you’ve created. You can also choose only individual users. You can only view a friend’s approximate location unless you choose to share your specific location and a window of time that you will be present at that location. Users who choose that option can also see the specific location of the friend that info is shared with. There is a timer function with user controls to set up how long you want to be detectable. Facebook says this is to help prevent stalking and concerns with that issue.

A user can also enable push notifications to see if friends are nearby. There is also a traveling feature that shows you when friends are out of town.

The technology uses GPS and triangulation among cell phone towers to pinpoint the location data to provide a map with your friends’ locations on it, assuming everyone has opted in on the same level. Nearby Friends also will create an activity log which users can delete in addition to maps of your locations. That is also deletable  by the user. Nearby Friends won’t poll GPS as frequently if it detects you are in one location and stationary based on data it receives from the accelerometer in your device. Facebook named battery drain as one of its concerns in creating Nearby Friends. Constant GPS polling can quickly drain a battery.

Will the careful messaging, selectable restrictions and opt-in be enough to quell the bounce back Facebook is sure to receive from privacy advocates over Nearby Friends? We’ll have to wait and see once the feature is in use. Based on the descriptions of the functionality one can see the potential for holes in the service as it is being described.

There have certainly been other attempts at this type of location experience that focused on proximity of friends before. Highlight, Banjo, Sonar, and others have tried a similar approach but largely faded from relevance because they were specialized Apps that required all parties to install an App and use the same experience to try and build an audience. Facebook is a well established large presence with millions of users and should have an easier time attracting users to the service. In fact, Nearby Friends began as an App called Glancee, developed by Andrea Vaccari. Glancee was purchased by Facebook in 2012.