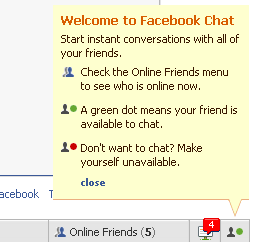 While everyone is talking about Google Buzz, Facebook has come out with something to make using Facebook Chat easier.

Facebook has launched support for the Jabber/XMPP protocol, the same protocol that Google Talk uses.  This will allow users to hook into Facebook chat using their favorite instant messenger clients without having to log into the Facebook web site.  This also gives seamless authentication and better security that was is currently available.

Facebook first announced that it was working on implementing Jabber/XMPP support way back in May 2008, and rumors that XMPP support was on its way began again in November.

Now, users have had the ability to use instant message clients such as Adium and Pidgin to access Facebook chat in the past, but it required the application developers to make adjustments to their products.  With Jabber/XMPP, developers dont have to make any changes.    Facebook is also announcing Facebook Connect support for these instant messaging applications.

Facebook has been steadily making changes in order to keep up with demand and keep themselves on top of the social networking marketspace.   Now with Google Buzz, what else will Facebook do??