Facebook Claims Users Aren't Paying Attention to Ads. Duh. Advertising is and Always Will be a Shell Game

Do you remember the shell and the pea game? Sure you do. You put the pea under one of the three shells, move the shells around and have your stooge guess which shell the pea is under. Real masters of the game figure out a slight of hand to take the pea out from under the shell, so that the stooge can’t possibly guess. That is of course, after an accomplice has shown that he or she can guess correctly. Well, essentially the entire business of the Internet is built on a similar con. In the case of the Internet the con is called advertising. 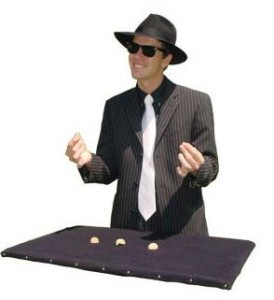 Don’t get me wrong, advertising can work. It can create an environment that calls a customer to action to buy a product or a service. But, just like with radio, TV, and print, advertising is no better or no worse than a wish and a prayer for those who throw money at it, hoping for results. I’ve asked this question a thousand times:, “who clicks on Internet ads?” I’ve gotten maybe a few yes responses. So, I’m continually amazed, awed, and surprised at the money that is spent for Internet advertising.

Now analysts are saying that Facebook, after suffering one of the craziest IPOs in that other great con game, the stock market, are saying that part of the problem with Facebook revenue is that users are paying attention to the ads on Facebook. Well, golly, gee. It looks like either Rip Van Winkle just woke up or these analysts want to continue to pile up on Facebook’s stock market woes.

Again, advertising can work, just like most things that humans think up can work. But after things begin working we have an amazing propensity for piling on, mimicking, copying, stealing, duplicating, and repeating those efforts in a way that invariably dilutes any real chance of success, turns off users, and well, kills the goose that laid the golden egg. Tell me, do you know anyone who likes email anymore?

In my life time I can come up with a good number of innovations that I’ve seen follow this cycle. I’m sure you can as well. But since this is about Internet advertising let’s focus on that. Sure, the big promises is to use all the data Facebook, or Google, or whoever gathers about us to make us feel like advertising will some day not only seem less obtrusive but also more tailored to our tastes, location, etc… But we aren’t there yet, and a big part of me hopes we never are. I can just imagine an ad popping up for an ambulance chasing lawyer on Google glasses, when I pass by a fender bender. Until then the advertising game is still a land where those who really want to get an earnest word out about a product or a service have to do so on a playing field with those who play the con game with the glee of a carnival barker. This turns folks off quicker than the annoying pop-ups, pop-unders, floating polls, slideshows, or any other kind of Internet ad that does its best to hide the ‘X’ or close button.

The unfortunate reality here is that those who make the money off of advertisers could care less about what any advertiser wants to pay money to talk about. Yeah, there are some taboo topics out there. But, by and large Facebook, Google, and the rest, would let you sell seats at a funeral for cremated LOL Cats if you wanted to. And that’s part of the problem. Those who provide the platforms for advertising make as much off of pushing crap as they do off of serious approaches at customer persuasion.

Facebooks woes are no different than your ever diminishing daily newspaper. Some advertisers and many consumers have figured out the con and are refusing to pay or click. Let’s face it though, when an industry (advertising) that charges its customers by eyeballs or impressions, when most folks know that these measurements are impossible to predict, can continue to do so, the con game will continue. In my view, we’d be better off if every time we clicked off an ad with a close button, the company doing the advertising got a refund. But that will never happen.

And before anyone can say it, yes, GBM uses advertising to pay its expenses. We’re not better nor no worse than anyone else in this crazy biz.