Today Facebook released an update to its iPhone and iPad app that lets users record video and voice messages within the app while also updating the Nearby page.

In the new Facebook app users can take video from the same screen where they can take photos. Getting to the option involves a number of taps. First tap “Photo” at the top of the app, then tap the camera app in the lower left corner, and then change the camera from photo to video mode.

It’s complicated, but it means users can take and upload videos to Facebook straight from the app. Unfortunately, there is no easy way to launch the photo and video feature directly to the camera instead of the camera roll. 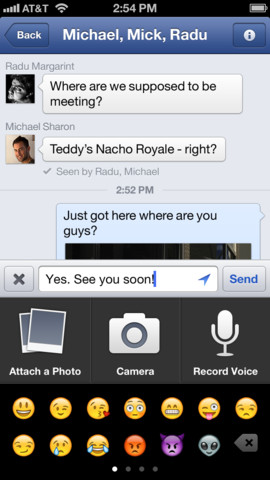 The Facebook app update also brings the voice recording feature from Facebook Messenger to the main app. With the new feature users can record and send voice messages to their friends via private messages on Facebook. There’s currently no way to post voice messages as a status update or to a Friend’s Timeline.

The new feature means users don’t have to download Messenger to send voice messages, however. There’s no mention of the free VoIP calling feature that also recently debuted in Facebook Messenger.

Finally, Facebook also updated its Nearby page to make it easier to discover things in the local area. The new tab looks suspiciously like Foursquare, which is good for users because the page offers an easy way to view lists of locations as well as a map.

Nearby lets users search for locations by category, or through search. It also includes a user history of searches, so its easy to find places after the initial search. Unfortunately, the data in Nearby isn’t always correct in our brief time with the app, however, so users may want to double-check the information for some locations.