Timing is everything in life. And Facebook seems to want the world on a timeline that many users aren’t quite ready for yet. And from the sound of things the folks at Facebook haven’t been reading enough of the Edward Snowden leak stories pouring through its feeds that say the NSA and other agencies can turn on microphones and cameras remotely to do some snooping.

The new Facebook listening feature is creeping out some users even before it rolls out. Here’s how this “audio recognition” feature supposedly works. If you activate the feature, when you go to make a status update, Facebook turns on the microphone for 15 seconds to listen to what’s around you. It it can make a match with what’s in its database, Facebook can append a short message to the end of your status update listing what song you may have been listening to, or what TV show you might have been watching. Creepy line meet status update. The feature is scheduled to roll out in the next few weeks to those using the iOS or Android App. 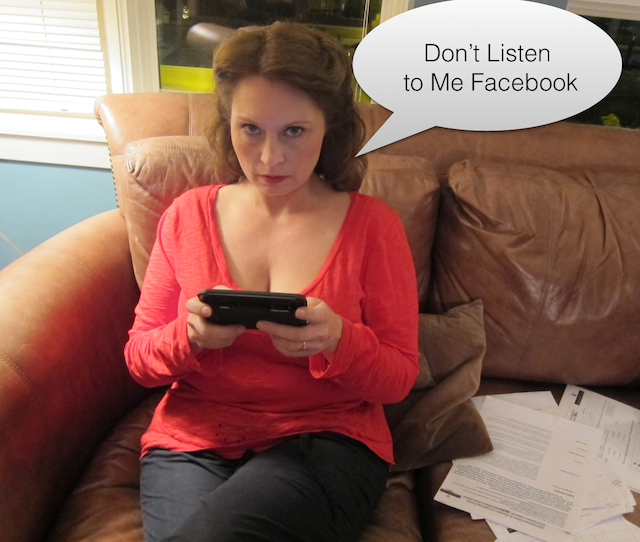 Now, note that you have to activate the feature, according to Facebook. This doesn’t happen automatically. Facebook is insistent that it is an optional feature and you are in control of sharing any data about a song or TV show that it might pick up and match. At least Facebook seems to have learned its lesson about pushing through and turning on features automatically. We’ve all watched Facebook grow up and learn some hard lessons about that kind of thing over the past several years. Maybe it has passed beyond Internet pubescence to a slightly more mature, but still adolescently aggressive posture about these kind of things.

But that’s not enough to calm the jitters those deeply concerned about their privacy are feeling and expressing. There is already at least one petition that seems to be gathering steam with more and more users signing on.

If you’re thinking those concerned are being overly paranoid, there is one thought you should consider. If and when the microphone is on, anything it can pick up can be recorded. Facebook claims that it doesn’t store the recordings. My wife suggested turning the feature on and posting some status updates while articulating two word statements that include vulgar euphemisms for fornication and Facebook. Here’s a statement from Facebook:

No matter how interesting your conversation, this feature does not store sound or recordings. Facebook isn’t listening to or storing your conversations.  Here’s how it works: if you choose to turn the feature on, when you write a status update, the app converts any sound into an audio fingerprint on your phone. This fingerprint is sent to our servers to try and match it against our database of audio and TV fingerprints. By design, we do not store fingerprints from your device for any amount of time. And in any event, the fingerprints can’t be reversed into the original audio because they don’t contain enough information.

So is an “audio fingerprint” a new form of metadata? We’ve learned quite a bit about metadata over the last year and what it can reveal. And, in Facebook’s business model keep one thing in mind. Every feature that gets added is supposedly designed to benefit the user. But Facebook isn’t going to roll out a feature that collects (no matter how briefly) any sort of data if it doesn’t have a monetization goal behind it. That would mean advertising is some form.

It isn’t hard to imagine a scenario where Facebook listens in and hears you grooving to Creedence Clearwater Revival, and later you start seeing ads for similar types of music popping up in your feed, if not riverboat cruises down the Mississippi.

The creepy line of always listening devices and services is one that’s going to always be a tricky balancing act. While its easy to see the benefits, it is just as easy to see the potential privacy pitfalls. But remember, the trade off for any benefit you may receive as a user is sharing a bit of data about yourself with the service. Google Now, NEST thermostats, Microsoft’s Kinect on an Xbox, your smartphone with location services turned on, the list goes on and on.

Of course we’re concerned about devices and online companies that do this kind of thing. But it is also a good reminder that Facebook, Google, and other online services are no different than our supermarkets, our banks, and any retail outlet we have a loyalty or discount card from. When we moved back to Chicago last September we opened a bank account at a local bank on a Friday morning. On the following Monday we had junk mail in our mail box welcoming us to the neighborhood offering discounts to local merchants. Our information could only have come from that bank.

No matter how Facebook wants to spin the limitations on this listening feature as it rolls out, it certainly seems like it has turned a deaf ear to the messy security and privacy environment we’re all finding our way through these days. Perhaps we should all turn on the feature and play the NBC Edward Snowden interviews while we post Facebook updates. Either that log in to YouTube and crank up some Can You Hear Me Now commercials from Verizon. I wonder what that would do to the algorithms?