Facebook plans to deliver more than just social updates and photos with Facebook M, a new addition to Facebook Messenger that will take on personal assistant tools like Apple’s Siri, Google Now and Microsoft’s Cortana.

In a new limited trial Facebook confirmed the new feature that will combine computer driven personal assistant features with human backed help. Currently Facebook M is only available to a few hundred users in the Bay Area of California, but the company is targeting a wider roll-out to the  968 million active daily Facebook users.

With the new Facebook M digital assistant users will be able to make a reservation at a restaurant, send a birthday gift and even schedule travel arrangements. Wired reports on the new feature that David Marcus, vice president of messaging products at Facebook explains is different because, “It can perform tasks that none of the others can,” referring to Siri, Cortana and Google Now. 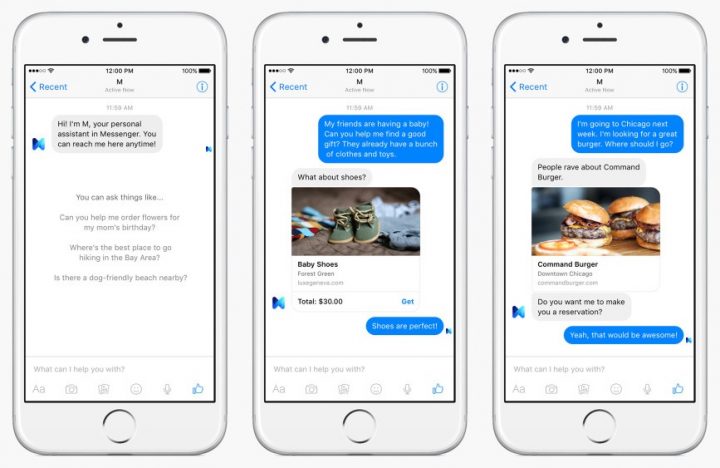 Facebook M is the social network’s answer to Google Now, Siri and Cortana with a human component.

While the competition relies on artificial intelligence, that improves regularly, Facebook M uses a human component that allows the service to do more than services that rely only on smart technology.

In the Facebook announcement on Wired, Jessi Hempel describes the new tool as, “It’s a virtual assistant powered by artificial intelligence as well as a band of Facebook employees, dubbed M trainers, who will make sure that every request is answered.”

The new Facebook M personal assistant isn’t just there to help you plan a date, the company plans to use it to monetize your interactions. Marcus describes the service as, “an opportunity for us to [make money] over time.”

When users choose to use the new Facebook M personal assistant the tool will not link up to other Facebook data that users share on the network yet. The human component of Facebook M comes from contractors who work with Facebook. Just as a concierge at a credit card might set up a dinner with a special surprise at the end, the human part of Facebook M can add a touch that AI driven services don’t yet factor in.

Facebook M is only available to a small group of users at this time, but will become a free tool for all Facebook users in the future. No specific Facebook M release date details are available. The company shows new service running on iPhone, but does not mention specific devices or operating systems.