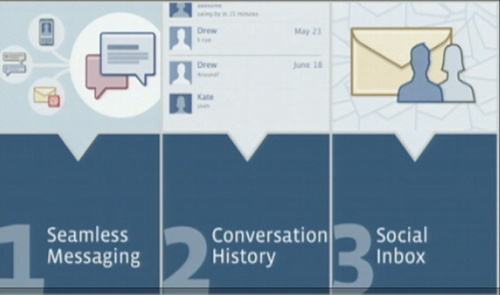 If you don’t already think that Facebook already has too much of your information, then you can surrender even more by giving Facebook access to your emails, chats, and text messages via Facebook Messages. According to Mark Zuckerberg, this is a messaging system that includes email as one component, and can aggregate your various communication systems into one centralized messaging system on Facebook called Facebook Messages.

The system aggregates all your conversations from emails, chats, and SMS messages into a single thread, giving you a time capsule of your interaction with that person. Users can re-direct their emails to Facebook’s messaging system, which aims to bring faster, real-time messaging; Zuckerberg says that traditional email is too slow and formal. To make it simple, there are no subject lines and no CC nor BCC fields; perhaps Facebook can usher in an era of “mobile” email where emails can be as simple and informal as an SMS message riddled with LOLs and OMGs.

Another part of the messaging system is prioritizing messages. With social inbox, Facebook will allow users, like Google’s Priority Inbox, to sort messages by social contacts found on your social network in Facebook. The social inbox could also rank messages by importance based on conversation history. Facebook may have an advantage over Google’s Priority Inbox within Gmail since Facebook actually knows who your friends are, what your network is, and can determine the importance of messages via relationships. Also, this should help users weed out spam more easily.

A facebook.com email address is also an option, but not required.

For now though, Zuckerberg is insisting this isn’t an email killer, though Facebook’s new system could potentially change the rules and dynamics behind email, potentially demanding faster responses with its more real-time nature and changing the formal language to an informal one based on acronyms and emoticons that are more common in SMS messages.

Roll-out is said to be done “pretty slowly” over the period of the next months and the initial roll-out will be done via invites. App updates for iPhones and other mobile clients should be coming out soon that will incorporate Facebook Messages.