Is Facebook responsible for terrible iPhone battery life? The evidence is mounting against the social networking giant.

One of the new features in iOS 9 is the ability to not just see what’s draining your battery, but also how it’s doing it. That includes granularity like breaking out screen on time, background data usage, etc.

Apple has worked to try and minimize the ability for iPhone apps to have significant impacts on your iPhone’s battery life without you knowing about it.  That means that if you’re playing an intense game, your battery will drain, but you’ll be conscious of it. Likewise, apps working in the background should have the lightest impact; that might mean that if you aren’t actively streaming audio or video, iOS will shut the app down invisibly, letting you go back to where you were when you tap on it later.

Facebook might be flaunting those guidelines in an attempt to keep you in their app for longer. 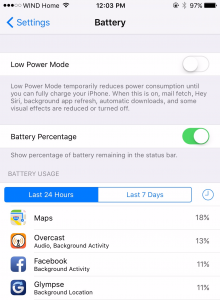 We found Facebook to be a battery hog on our iPhones, too.

On Medium, Matt Galligan made a post complaining about this problem. One of the features of iOS is the ability to disable when apps can access your data connection. Can they use it only when you’re actually interacting with the app, or can they use it whenever they like? A good example of this is your email client – turning on background data lets it notify you of new messages by periodically checking the server. If you turn it off, it’ll only check for new messages when you explicitly ask it to do so.

Galligan found that on his iPhone, Facebook managed to access background data capabilities for 3.4 hours over the last week. When combined with 1.7 hours of on-screen time, it drained 15% of his iPhone’s battery for the entire week. What is surprising and controversial about this fact is that background data for the Facebook app was turned off.

Is Facebook cheating to get around iPhone app restrictions?

Given the amount of resources Facebook throws at their mobile apps – and it is substantial, now that over half a billion people access the site solely through their mobile device – it seems unlikely that the company is unable to reduce its power footprint on the iPhone.

Some people are suggesting that Facebook is managing to hijack some of the programming in iOS and use it in ways it wasn’t designed. Even with background data turned off, some apps are able to stay awake if you’re listening to streaming audio, for example. While this is currently just conjecture, it’s thought that Facebook can take advantage of autoplaying videos to continue streaming silent audio in the background. Since your iPhone will keep the app active under the assumption that you’re listening to audio, Facebook will use the extra time to update content – thus sucking down precious battery life.

Our own testing has found that the Facebook app can cause audio issues with other apps on your iPhone, when lends credence to the idea.

What can you do about it? While getting rid of Facebook would work, the service can actually be pretty useful. One thing you might want to do is immediately disable videos from autoplaying in your iPhone Facebook app. That way, if Facebook is being sneaky with regard to background audio, avoiding video will keep them from waking up your phone.

Also, try actively killing the app; you can either double click the Home button, or 3D Touch the left side of your iPhone 6s or iPhone 6s Plus to bring up the task switcher. From there, simply slide up on the Facebook app to close it. If Facebook is awake in the background, this will close any connections until the next time you open the app.

Finally, you might consider uninstalling the app entirely. Using the mobile web site is not so different from the app experience these days, and Safari has many built-in safeguards to maximize battery life. Additionally, if you’re in the U.S., you can try the company’s alternate Paper app. A bonus feature of Paper is that it doesn’t have any of Facebook’s mobile advertising; the downside is that it doesn’t get updated as often, and misses out on new features like nested commenting.