The Facebook News Feed can be seen as both awesome and horrible, but Facebook is making it so that it’ll at least be less horrible and more awesome by changing how users deal with News Feed items that they want and don’t want to see.

Facebook is rolling out a new settings menu for the News Feed that gives you more options for controlling what shows up in your News Feed.

Whenever you  go to hide a certain post, you’ll now be given the option to simply “see less” from that user, instead of just hiding that one post from your News Feed or simply hiding every post from them. This prevents you from having to unfriend them entirely just so you don’t have to see a majority of their updates, especially if they regularly post a lot of content.

You can also click on News Feed Settings to see a whole list of friends, groups, and pages that you’re following and unfollowing, making it easy to make changes by following or unfollowing certain friends.

One thing that we’re not really sure about is just how Facebook decides to show less of a friend’s updates and content. The “see less” option allows you to simply tone down the amount of updates you’ll see from a friend, but we’re not sure how Facebook will decide what content to show from a friend and what exactly it will hide. We’re guessing it will use some sort of algorithms like it always does, but we’re sure that users are interested in knowing how the social network is deciding on what content to show and hide.

The Facebook News Feed has always been in somewhat of a face-lift as the social network continues to change it around and improve certain features, and that probably won’t stop any time soon, which is definitely a good thing, as we should see more and more improvements come to Facebook over the next few months and years.

But of course, Facebook has quickly become a breeding ground for annoying updates from friends, whether it’s political rants or negative attitudes that clog up your News Feed, sometimes it’s best to just shut it all down and call it quits. 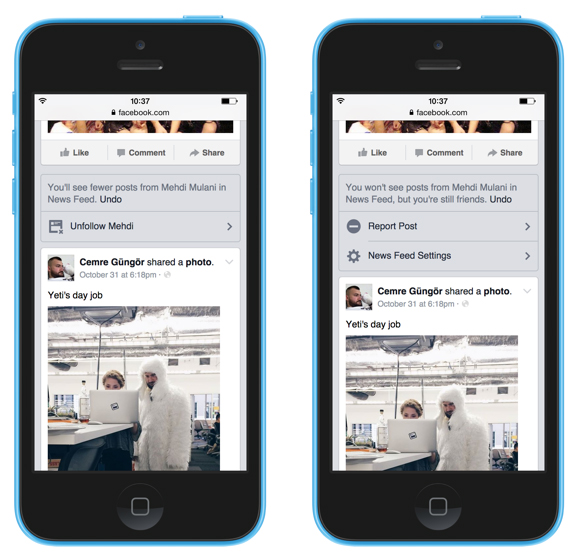 Facebook used to be a magical place where college students were able to connect with each other in a way that was never thought possible. However, many will argue that the social network has turned into a cesspool filled with immature teenagers and folks who shouldn’t even be near a computer in the first place.

It can be said that Facebook is a great place to show friends and family members what you’re up to, especially those who live far away that you’re not able to connect with in real life, but if it isn’t worth the mess of stupid posts that you see daily, on top of the many privacy concerns with the social network, it’s not exactly something that you need to keep using.

In any case, these new News Feed features should at least make your News Feed a bit more bearable the next time you go and browse on Facebook.