Next week Facebook will debut a new version of the News Feed, the main way users interact with the network, which may include a new mobile version as well.

According to The Verge the event will take place at Facebook’s Menlo Park headquarters on Thursday, March 7 at 10 a.m. PT/1 p.m. ET. The invitation doesn’t give much information beyond asking press to “come see a new look for News Feed.” The invite doesn’t give any hints as to what the new News Feed may look like.

Earlier this year TechCrunch saw a new Facebook mobile app which could be the new News Feed Facebook will unveil. The News Feed in the app used large images with text laid over them instead of the blue, white and grey News Feed Facebook currently uses in its apps. 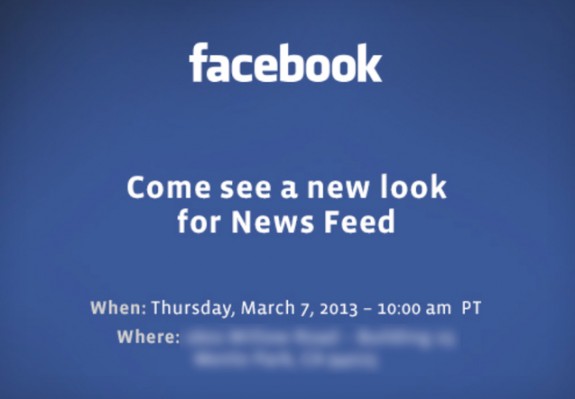 The new app also separated different statuses by type, so users could choose to view news or photos, for example.

Facebook recently made a few minor changes to the News Feed in its mobile apps, making the buttons for liking status updates, commenting and sharing larger and easier to tap. The News Feed hasn’t seen a major overhaul on the mobile apps in years, however.

The last major change Facebook made to its mobile apps came when it introduced Timelines, and that feature arrived on mobile long after it came to the desktop version of the site.

No matter what Facebook announces next week, there’s a chance users won’t have to use it right away. When Facebook announces new features, such as Graph Search, it rolls out the feature to users slowly. With big features the social network occasionally gives users a choice on when they want to switch to the new layout, but eventually forces it upon everyone.