In the U.S., the iPhone is available on three major U.S. carriers–Sprint, Verizon Wireless, and AT&T Mobility. However, if you’re a fond user of Apple’s free FaceTime video chatting service between iOS and OS X devices, you may want to consider Verizon Wireless and Sprint’s Now Network over that of AT&T’s, especially once iOS 6 hits if AT&T intends charging customers for using video chat over its cellular network as early reports imply.

With the announcement of iOS 6, which is in developer preview right now, Apple promised a long awaited feature for FaceTime users: the ability to conduct video calls over 3G and 4G cellular networks; FaceTime was previously restricted to WiFi calling in the past over speculations of large bandwidth consumption and/or low video quality that did not meet Apple’s standards on slower 3G networks.

However, it seems that using 3G/4G networks to conduct those calls may be costly for AT&T users and it is speculated that the Rethink Possible network may charge its subscribers a fee for the privilege of using its fast network for video calls. According to a report on 9 to 5 Mac, a few developers who have upgraded to iOS 6 beta 3 have noticed that an error message popped up on AT&T’s iPhone devices whereas on iPhones on competing carriers do not have the error message when attempting a FaceTime over 3G/4G call. 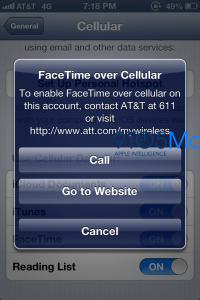 We attempted to bring up the same same error message when enabling the FaceTime over Cellular feature on a Verizon iPad WiFi + Cellular, but the feature enabled without an issue. AT&T charges for a separate plan to use Personal Hotspot on its network, and the carrier appears set to replicate that process with FaceTime over Cellular.

So far, AT&T has not issued any statement on whether or not it would charge for the feature and is remaining elusive. Instead, the carrier only states that it is working with Apple to deliver a good experience to customers:

We’re working closely with Apple on the new developer build of iOS6 and we’ll share more information with our customers as it becomes available.

It’s unclear if AT&T’s collaboration, from its vague statement, will result in additional billing for video calls over 3G/4G or if it intends to work with Apple to optimize its network to deliver a great experience without any additional surcharges for video calling.

FaceTime over 3G/4G will utilize quite a bit of data, and it may be reasonable for AT&T to try to charge customers. However, that may not be a fair case as third-party video chat apps like Skype, Tango, and others would not be subject to the same charges.

It’s unclear if other carriers, like Verizon Wireless and Sprint, in the U.S. would follow suit and charge users, but so far there hasn’t been any error messages when attempting to enable FaceTime over 3G/4G for those carriers’ iPhone units.

In the past, prior to iOS 6, users who jailbreak can install a hack to enable FaceTime over cellular networks.