There are a lot of scams making their way across the internet that aim to steal your personal information if you’re not careful, and Apple users are no exception.

While it may not be anything new, an email was sent to me over the weekend that claimed to be from Apple Customer Support. The email told me that my Apple ID account had been temporarily frozen and that I needed to confirm my Apple ID account information in order to unfreeze it. The reason for the freezing is because someone apparently added or changed a contact email address on my account.

So it appears someone hacked into my account and Apple is simply being the good guy and stopping the hacker in his or her tracks, but none of that actually happened, and what I merely received in my inbox was a phishing scam designed to steal my Apple ID username and password.

If you’re not familiar with the term “phishing,” you no doubt at least experienced at some point during your lifetime. Phishing is when “Phishing is when a scammer poses as a legitimate company in order to acquire personal information such as your username, password, credit card details, etc.

This email looks like an official email from Apple, but not entirely. There are a few ways to tell if this kind of email is a scam, and usually it only takes a few seconds. 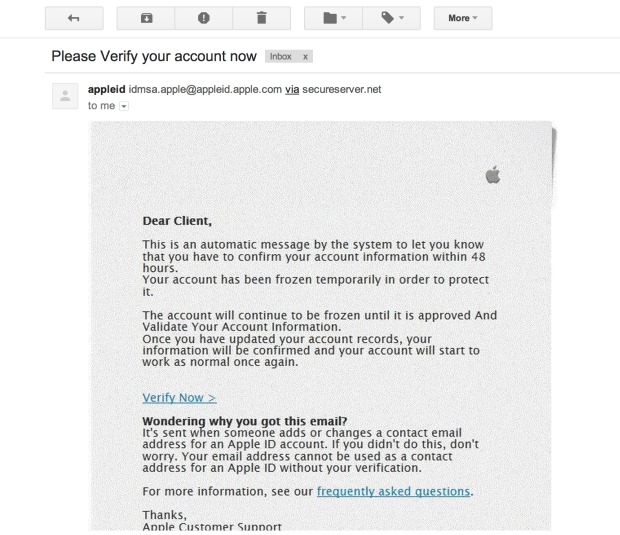 Furthermore, when you hover over any links in the email, you’ll get a small pop-up in the lower-left corner of the browser that shows you where the link takes you. If this was an official email from Apple, it would take us to an Apple.com link. However, the email that I received links to a webpage on a site called Infolktainment.com (for the record, we don’t recommend actually going there).

Phishing scams are nothing new and they’ve been around for as long as the internet has existed. Apple is a heavy target, though, as it’s one of the most popular brands on Earth, so it’s fairly easy for a scammer to reach a wide selection of users by posing as Apple. Unfortunately, many users take the bait since they’re easily convinced that it’s a legitimate email, and they end up having their iTunes account hacked into.

The next time you get one of these emails, simply just mark it as spam so that similar emails don’t show up in your inbox again. Instead, they’ll be sent straight to your spam folder. Of course, scammers always find ways around this, like sending phishing emails from different email addresses so that they still make their way to your inbox. This can be pretty frustrating, but the more you send these kinds of emails to your spam folder, the more you’re knocking them down one at a time.

It’s also important to make sure that you give your Apple ID account a strong password with a mixture of letters and numbers in order to make it difficult to crack. And obviously never give out your Apple ID password to anyone, unless they’re a trusted friend or a family member.