The Flappy Bird craze is back with force as #FallOutBird trends on Twitter thanks to a simultaneous release of Fall Out Bird for iPhone, Android and Windows Phone.

Fall Out Bird is a Flappy Bird clone with the members of Fall Out Boy in place of a bird and guitars in place of spikes. The game sounds a bit ridiculous, but it is a real game that arrives as part of a promo for a new Fall Out Boy Monument Tour.

The Fall Out Bird game arrived on the iPhone, iPad, Android and Windows Phone earlier this week, but exploded when the band promised to follow back anyone that shares their high score with the #FallOutBird hashtag on Twitter. In addition to the follow, fans are entered in a chance to see the band’s Monument Tour in the U.S. 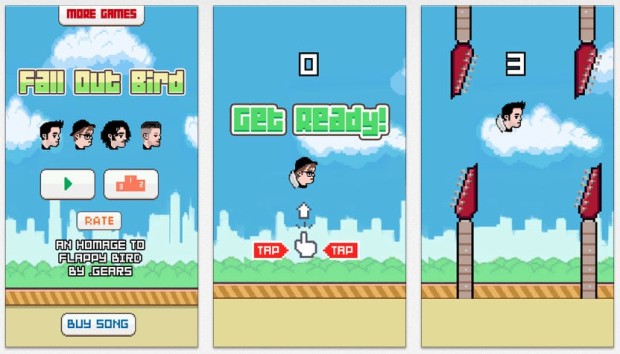 The Fall Out Bird game and an offer from the band push #FallOutBird to trend on Twitter.

To enter users just need to download Fall Out Bird and play it at least once to get a high score. Users don’t need the highest Fall Out Bird score to win, which is good considering the top score is nearly 400 at this time. There are at least 175,000 players in the game with a score better than 2, so there are easily over 200,000 people possibly in the running for the #FallOutBird prize.

To play Fall Out Bird users tap on the screen to push a band member’s head through the are between two guitars. The app is more forgiving than the original Flappy Bird Game so users should be able to get a higher score without hoping for a cheat. Download the Fall Out Bird Game from the following links.

Apple cracked down on games using the Flappy Bird name earlier this week, but Fall Out Bird made the cut, perhaps thanks to the fact that it does not use Flappy Bird in the title.

we will also pick one random person to win a pair of #MONUMENTOUR tickets (US only). must include #falloutbird.

The #FallOutBird hashtag took over the trending charts on Twitter in the U.S. and worldwide this afternoon thanks to the band’s offer of concert tickets and a follow back. The game is not yet trending on Facebook.