In June, Bethesda confirmed the arrival of its long-awaited follow-up to Fallout 3. Fallout 4 is official and it will be arriving in November for the PC, Xbox One and PS4.

Since its initial announcement, we’ve seen a number of new and important details emerge including Fallout 4 deals, Fallout 4 gameplay info, and updated information regarding the elusive Fallout 4 Pip Boy Edition. We’ve also heard about something called the Fallout 4 Loot Crate.

Several weeks ago, Bethesda and Loot Crate confirmed a limited edition Fallout 4 crate. The companies provided a sign up page and a teaser but they didn’t confirm a pre-order date or a specific release date for the enticing bundle. A bundle that doesn’t include a copy of Fallout 4 the game. 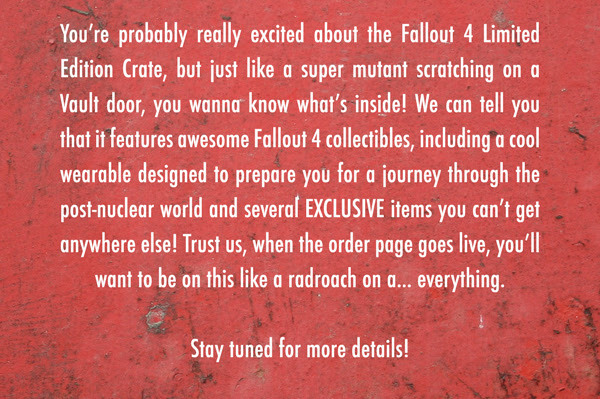 A few days ago, Loot Crate sent out a teaser promising details in the near future. The teaser noted that the Fallout 4 Limited Edition crate would come with exclusive collectibles including a “cool wearable designed to prepare you for a journey through the post-nuclear world.”

With all of that confirmed, we want to take a look at the most important things buyers need to know about the Fallout 4 Loot Crate release date, release time, and more.

Bethesda and Loot Crate will start taking pre-orders for the Fallout 4 Limited Edition Crate tomorrow, September 23rd. This date was confirmed to those who signed up via Loot Crate’s website and it is set in stone.

Fallout 4 Loot Crate pre-orders will be taken through Loot Crate’s website and we expect the company’s official Fallout 4 page to change tomorrow to accommodate.

Those looking to buy the bundle ahead of its release date will want to bookmark that site and be on the lookout for more official details once we get closer to the release time. 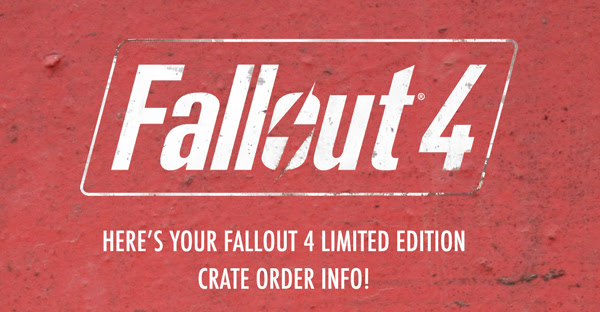 In addition to the new details about the Fallout 4 Loot Crate pre-order date and time, Loot Crate has finally confirmed a release date. 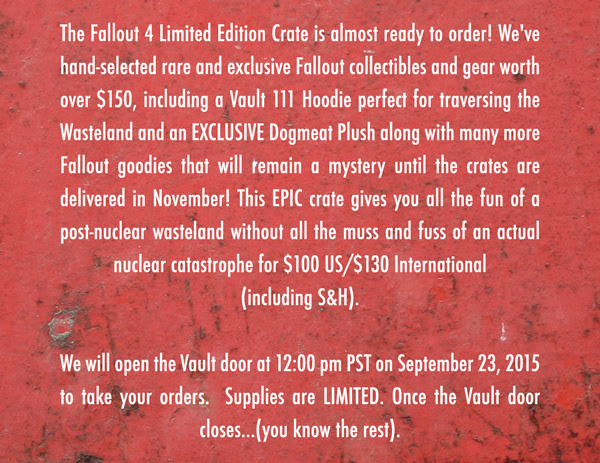 The Fallout 4 Loot Crate will start shipping out in early November, around the time that the game is released. In other words, don’t expect your Fallout 4 Loot Crate tomorrow or at any point in October. This is going to tie in with the game’s highly anticipated release date on November 10th.

The Fallout 4 Loot Crate price is confirmed as well. For over $150 worth of goods, the companies will be charging $100 for orders heading out to customers in the United States and $130 for international shoppers. That price includes shipping and handling.

What’s in the Fallout 4 Loot Crate?

Those of you lucky enough to snag one of these will receive hand-selected and rare Fallout 4 collectibles, only some of which will be confirmed ahead of November. 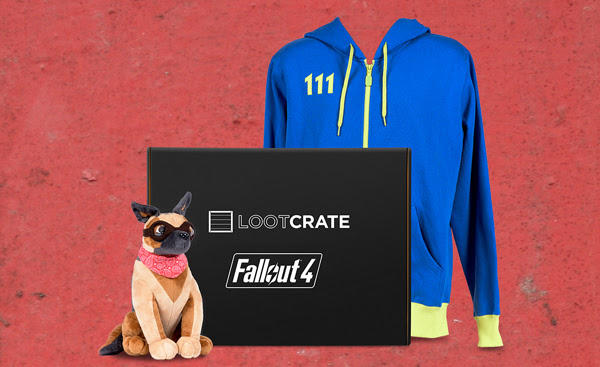 Loot Crate says that the crate will contain a Vault 111 hoodie, an exclusive Dogmeat plush toy, and other items that it says will remain a mystery until the crates start arriving on doorsteps in November.

Finally, it’s worth mentioning that supplies are going to be limited. We’ve heard through the grapevine that the company is only producing a few thousand of these limited edition Fallout 4 crates so you’ll want to show up right when it goes on sale tomorrow or else you run the risk of missing out.

Fallout 4 is an extremely popular game and you saw how fast the Fallout 4 Pip Boy Edition sold out. Be there at Noon PT tomorrow.

PC Fallout 4 Release: 5 Things to Have On Your Radar
Related Topics:Fallout 4Gaming