As the Fallout 4 release date approaches, we continue to see new and exciting details emerge. Today, Bethesda’s confirmed a brand new Fallout 4 pre-order bonus that should make some Xbox One, PS4 and PC users very happy.

Bethesda and Fallout 4 have stayed busy in the weeks since the game’s big reveal at E3 2015. We’ve seen detail after detail emerge including a new contest that features a Pip Boy, a custom Xbox One and a trip to Boston as prizes.

With the Fallout 4 release date fast approaching, Bethesda’s kicking its marketing into high gear and today it has confirmed yet another key release detail that should be music to the ears of many Fallout 4 buyers.

Today, Bethesda released a flurry of new Fallout 4 details which include information about gameplay and a brand new pre-order bonus that will be included in all pre-orders of the physical version of the game.

Bethesda’s announcements center around the leveling system and perks that will play a big role in the development of Fallout 4’s main character.

The Perk Poster shows off the S.P.E.C.I.A.L. system and the many perks that you’ll be able to choose from as the character levels up. These range from Gunslinger to Gun Fu to Iron Fist. 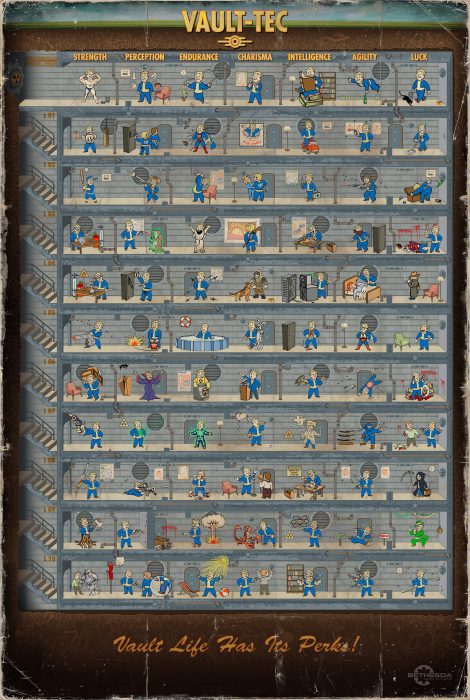 The company doesn’t mention anything about digital pre-orders. It’s not clear if the company will sell the poster separately or those who pre-order the digital version of the game will have to find other means of acquiring this unique poster for their collection.

With just weeks to go before the Fallout 4 release date, the company continues to tease the game and give away prizes. Earlier today, the company confirmed that a few lucky entrants in its Countdown to Fallout 4 contest won a Fallout 4 messenger bag.

In October, Bethesda is set to give away several copies of the elusive Fallout 4 Pip Boy Edition. The collectors version of the game is sold out in the United States and it won’t be coming back before the game’s release date.

Those looking to snag one ahead of the release date will want to keep an eye on Bethesda’s two Fallout 4 contests and resellers like eBay. Fallout 4 Pip Boy Edition pre-orders have been selling for $400 or more and the price could only increase as the game becomes even more visible ahead of November’s launch.

PC Fallout 4 Release: 5 Things to Have On Your Radar
Related Topics:Fallout 4GamingPCPS4Xbox One