Far Cry 4 is an incredibly fun and fast paced game, and if you still can’t decide if the game is worth buying or if you just want to know what you should do when you get the game — here are 10 things you need to try in Far Cry.

Far Cry 4 is available on PS4, PS3, Xbox One, Xbox 360 and PC for $60. It is an open world game with co-op multi-player and a varied environment that opens up a wide range of in-game activities.

After watching the Far Cry 4 trailer multiple times and listening to one of the Gotta Be Mobile team members go on and on about how much fun Far Cry 4 is, I still wasn’t ready to buy the game. Then I watched this incredibly fun Far Cry 4 video that outlines 10 Things to Do in Far Cry 4. 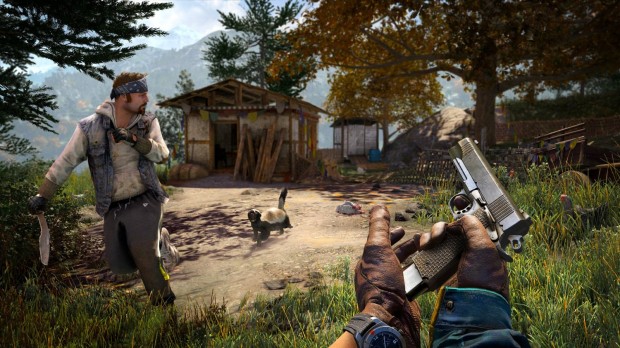 C1intBeastwood produced this hilarious compilation of fun things  to do in Far Cry 4. If you’re on the edge about buying Far Cry 4, this could push you over it so watch with caution. For those of you who already own Far Cry 4, get ready to grab a friend and have some fun.

Grab some buzzer and a handful of grenades and go to work trying to time your toss perfectly to take out your friend or an enemy depending who you play with.

Stack explosives to launch  a bunch of bears into the sky, step back and take aim for some good old fashioned Clay Bear Shooting.

Forget a fishing pole. Grab some explosives and fill your boat with gators and fish by dropping explosives into the closest body of water.

Can you 360 No Scope a Goat? With some practice you can do just that in Far Cry 4. You’ll probably need some luck too.

Grab a friend, a bow and arrow and an elephant each and then line up on a road to joust. The first person to kill the other elephant wins.

Toss C4 in a bucket and play soccer until it explodes in a high stakes foot only game of hot potato. You can use this to launch a surprise attack, or just have fun.

Fill a boat with as much C4 and explosives as possible and launch your friend into the air. They won’t survive, but it will be fun.

Take to the roads for a semi-friendly game of death race. Grab a dune buggy and a grenade launcher and then hit the gas. There are no checkpoints, but there will be an end for someone.

Play James Bond and fly in to hijack a cargo truck from the air. This sounds a little mundane, but when you realize this is from a chopper that you hang from and you jump right into the driver seat with a knife in your hand, things do get a little more interesting.

10. Wingsuit Off a Bridge

This is the turning point for me, from hmm this is interesting to, wow that looks fun. Grab a wingsuit and jump off the bridge to fly through a environment for an adrenaline fueled ride through the countryside.