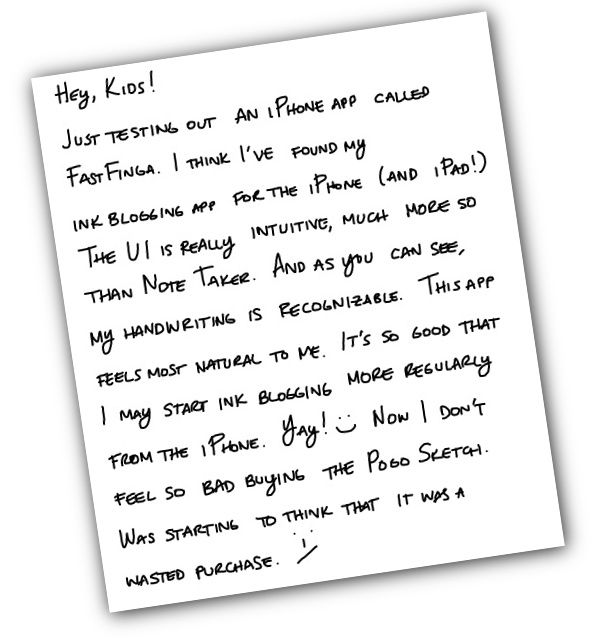 I had one rock solid reason to not want the iPad. One. No inking. More accurately, poor inking due to the lack of an active digitizer. Drawing and writing on the iPhone is possible via finger or a capacitive stylus, like the Pogo, but it always results in a sub-par experience for me. Well, judging from this sample from Jezlyn at Late to the Party, it’s not the inking on the iPhone that sucks – it’s me.

As many of your know, Jezlyn is a key supporter of my pet cause, ink blogging, which remains a semi-regular element of her blogging activities, and she’s done several experiments with it on different devices.

This time, she’s testing FastFinga, an iPhone app designed for taking handwritten notes, along with her Pogo Sketch, a full-sized pen version of the Pogo. The results are amazing. A tad lower than I’ve seen of her work with an active digitizer but much smoother than when she’s used a resistive touchscreen. If she’d posted that alone, I wouldn’t have known it was from an iPhone.

She’s posted an excellent how-to on the app with good background information. FastFinga has several export options, including Twitter, Evernote (which can read handwriting for search) and email that can make it a really good ink blogging app.

I downloaded it this morning, scratched out an entry with my short Pogo, and emailed it to my mobile blog. The result, as you can see, is a real piece of crap compared to Jezlyn’s, though her handwriting has always been better than mine, and much worse than my usual digital handwriting. Part of that is due to the short stylus but also because I can’t rest my palm on the screen. If I am to make this a part of my inking arsenal, I’ll need to look seriously at getting the Pogo Sketch and wearing a fingerless glove to avoid palm contact.

And yes, I am compelled, as the world’s foremost ink blogger, to pursue this option further, definitely on my iPhone and possibly on the iPad. Yeah, I know I said I wouldn’t get one, but that was when I thought the inking experience would suck. Looking at Jezlyn’s ink entry from an iPhone, there’s a good chance I will have to eat those words. Or as I’ve told Tablet PC doubters in the past, the device doesn’t suck, I do.

The system has a couple of limits, such as lack of handwriting conversion (I presume Jezlyn did her conversion manually) and lack of hyperlinks, a.k.a. Links in Ink, but those aren’t done automatically in my ink blogging method either (though maybe that will change if this app takes off). As a means of quick simple ink blogging and sending handwritten notes to Evernote, FastFinga appears to get the job done.

Update  (2/6/10): FastFinga was just updated but not without problems. From their website:

Important notice about v2.0 updater: If your documents contain several images, the updating process may fail. Please do not delete the application even if the updating failed. The fixed version 2.0.1 is under review process by Apple. Your existing docs will be able to import in v2.0.1.

We just found today (2/6/10) that it’s been pulled from the App Store, presumably until the flaw is fixed.