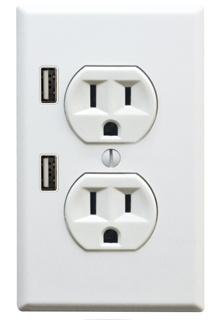 FastMac’s USB power wall outlet, first spotted in December, has been officially christened the U-Socket and, after running the hurdles of certification, sports a new design, USB 3.0 compatibility, and an output boost that makes it iPad-friendly.

The old design, still on the product purchase page, had the USB ports between and to the sides of the standard AC sockets. The redesign shifts both USB ports to the side, which should keep them out of the way of standard-sized plugs. It also officially tops the Energy Star requirements because the ports do not draw power unless a device is plugged in.

The specs describe the ports as “5V USB ports @ 1500mA (total)”. This is somewhat at odds with a letter sent to someone who pre-ordered the U-Socket, posted by Engadget, which states that the ports, when used singularly, support 10W, like the iPad AC adapter. However, 10W would be 5V at 2000mA (2 Amps). While the advertised spec is still enough to charge an iPad faster than most USB AC adapters,  it’s less than the 10W offered by iPad-specific chargers.

Regardless, USB ports built into standard wall outlets is a great idea that should only gain momentum as more USB-charged smart devices enter the market. With the redesign, the price bumped up to $19.95 pre-ordered (regular price appears to be $29.95).