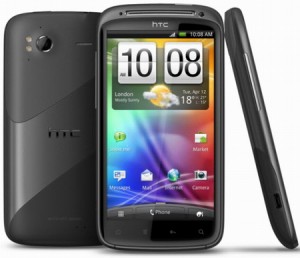 While T-Mobile USA had already announced the HTC Sensation 4G for its network–arriving mid-month–the high-powered super phone may also be coming to rival GSM network AT&T, according to an FCC filing. The Sensation has recently gone through the FCC with AT&T-compatible 3G/4G bands.

The unibody aluminum smartphone should be a nice high-end alternative to the HTC Inspire 4G, which had been available for sometime in Europe as the HTC Desire despite having only landed on AT&T’s 4G network within the last few months. The Sensation is seen by many as an evolution in design from the Desire’s construction, which is the same as the Inspire 4G.

The device’s unibody construction was recently under fire due to a death grip issue affecting WiFi and Bluetooth signals.

The Sensation brings with it a lot of powerful features, including the ability to record 1080p HD videos on the 8-megapixel rear camera, a front-facing camera, dual-core 1.2 GHz processor from Qualcomm, and a high resolution qHD display. The features that separate the Sensation from the other high-end HTC smartphone called the HTC EVO 3D, coming June 24th to Sprint, is that the Sensation lacks the glasses-free 3D display and the EVO 3D has dual rear-5-megapixel cameras for 3D video and photos.

The Sensation is powered by Android 2.3 Gingerbread and comes with the newest HTC Sense experience.

It’s unclear if the Sensation will arrive on AT&T as FCC approval does not necessarily guarantee a release.