The FCC is hoping to protect American wireless consumers from unsightly–and unexpected–high cellular phone and data bills with a new alert system that would warn mobile subscribers when you’re near your limits. With the nation’s two largest national carriers AT&T and Verizon Wireless having already moved to tiered and metered data plans, the FCC’s alert system will definitely help users stay within their mobile budget, especially since all four national carriers are building out fast next-generation 4G LTE networks that make it easy to consume more data.

The system will alert users twice–once before a user approaches their limits, and a second time once a user exceeds those limits. According to the FCC, the new alert system would cover 97 percent of all Americans.

These free alerts would cover limits for voice, data, SMS, and international roaming.

The graphic below shows which alert system each carrier has in place right now. One thing that I notice odd is the SMS/Text limit for AT&T in the chart below with the ‘N/A’ mark–that seems incorrect as I do get alerts when I reach my SMS cap for the month through AT&T right now. 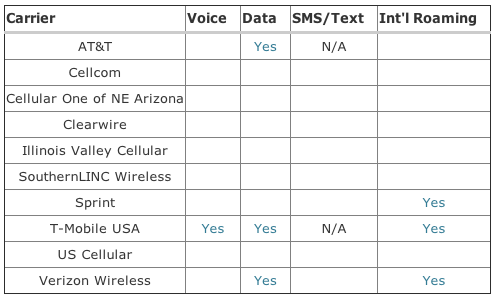