Microsoft’s 343 Industries is slowly building out its first-person shooter from last fall with new features. Late last week the studio revealed new features being packed into the February Halo 5 Update. The game already has some new game types and will pick up some ball related multiplayer modes sometime this month.

343 Industries revealed some new content that players could expect in the February Halo 5 Update late last week in a post on its Halo Waypoint website. This was after the company made some changes to what REQ Levels players need to be at before they can use some REQ Cards. Halo 5: Guardians is the next major chapter of Microsoft’s beloved first-person shooter featuring Master Chief John 117. The game launched in October, but has received updates to its multiplayer experience every month since then.

The big focus for the February Halo 5 Update are modes involving balls, judging by what 343 Industries says is coming.

Assault Mode requires that users deliver a ticking bomb to the other team’s goal before that bomb explodes. To keep things interesting, the ball surfaces in different places in the arena, forcing players to stay alert and spot it as soon as possible. Melee someone while carrying the ball and that player instantly dies and the player accelerates.

Grifball, a classic ball game from previous Halo titles is back with the February Halo 5 Update. 343 Industries has added some things to the mode, like Ground Pound and the ability to use thruster packs while wielding the Gravity Hammers that Grifball requires.

Fiesta is another classic mode coming in the February Halo 5 update. Joining it will be new options for creating ball maps and modes within Forge. Forge is the creation engine that 343 Industries added to Halo 5: Guardians after launch. 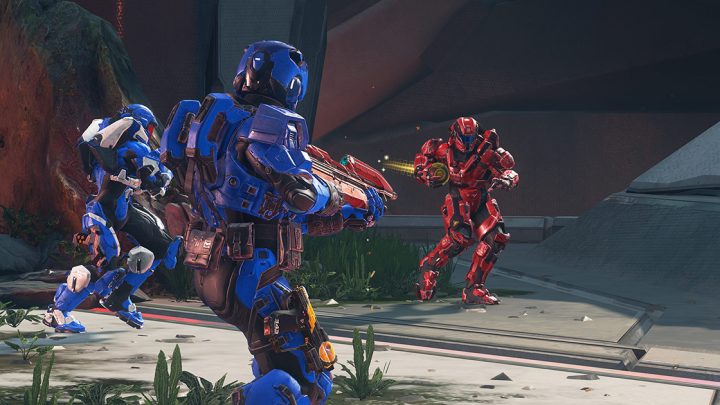 Users don’t have to wait until the February Halo 5 Update for a few changes.. Xbox One gamers that frequently dive into the Team Arena playlist may notice that Arena Breakout has been removed from that playlist. The studio said that feedback it received indicated Arena Breakout was way too different from the other modes that were in the Team Arena Playlist. The studio is says that it’s brainstorming ways to bring it back to multiplayer.

The Top Community Breakout maps have joined the Breakout playlist. In the post 343 Industries also reveals that it quietly made some changes to the blue tint on player’s armor in multiplayer. The change was necessary because blue teams in multiplayer seemed to have an unfair advantage in some game types.  The developer says that it has seen odds even out since making the color change.

All told, the changes Microsoft is making in the February Halo 5 Update aren’t legendary, but are good to have. 343 Industries vowed that it’d do a better job adding new content and managing playlists with Halo 5’s multiplayer than with previous games in the series.

Theoretically speaking, that makes sense given how the studio plans to maintain the game going forward. The studio is committed to adding content to Halo 5: Guardians for months. That includes new maps. Best of all, this content is completely free for every Halo 5: Guardians player to download. In fact, the new content isn’t even optional for those that are connected to Xbox Live.

Since launching, Halo 5: Guardians has come down in price. GameStop has new copies of the title available for $39.99. Used copies sell for slightly less, at $37.99. Users can still purchase the Xbox One 1TB Limited Edition Halo 5: Guardians Console Bundle and get the game and special console for $499.99