Xbox One entertainment consoles around the world are set to get a bit more social and easier to us this weekend. Microsoft says that the February Xbox One Update that it detailed at the end of last month is rolling out to users beginning today.

Microsoft confirmed that the February Xbox One Update release had arrived late yesterday in a post on its Xbox Wire news blog. One of the ways the Xbox One is different from the PS4 is how Microsoft adds new features to it. Xbox One owners get a few new features in updates almost every month. Sony prefers to reveal sweeping software upgrades a few times a year. 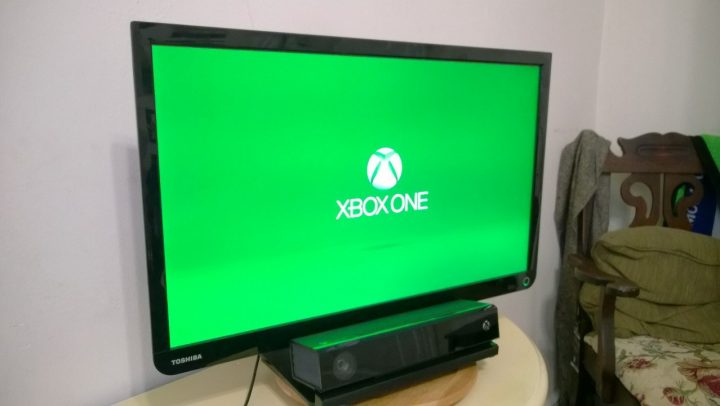 None of the new features stashed in the February Xbox One Update are sweeping, but they are nice to have.

Starting with the update, Xbox One owners can see who’s in a friends party before they decide to join in. The simple change should make it easier for players to avoid unsavory gamers that they’re not interested in talking to or communicating with.

With last year’s New Xbox One Experience upgrade, Microsoft removed the Gamescore Leaderboard that had been available on the console’s home page since launch. At first, the feature appeared to be scrapped. It turns out Microsoft’s teams only wanted to move it.

Starting with the February Xbox One Update, users can see which of their friends earned more Gamerscore than them from the Achievements area in their profile. Microsoft also killed the ability to hide a game inside the My Games & Apps area. That option is back and perfect for removing game betas from the game library temporarily. 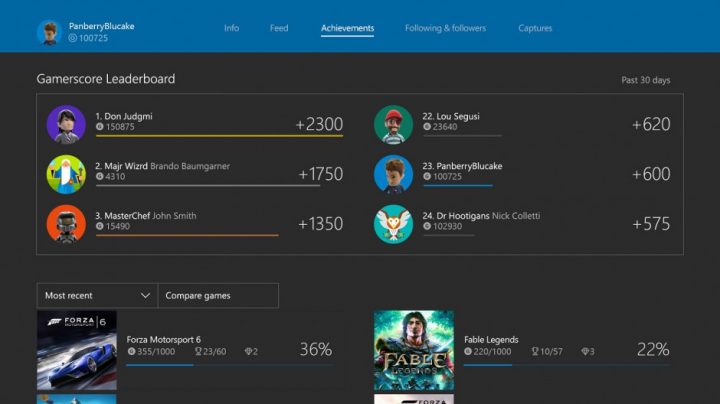 Since launch, Microsoft has worked to fix some of the console’s most baffling software oddities. One of these oddities was not being able to see pinned apps without being connected to Xbox Live. That’s now fixed. Microsoft is letting users rearrange their pins at will.

The Xbox Live Activity Feed and Xbox Live in general are getting some much-needed social improvements with the February Xbox One Update. Microsoft’s own Xbox team has a profile that posts relevant information about the console and ecosystem directly to the Activity Feeds of users. Populating that feed with relevant updates is easier than ever too. New Suggested Friends and Trending formulas on Microsoft’s side should improve everyone’s experience. Joining a Twitch broadcast directly from the Activity Feed is possible.

Finally, Microsoft has added options for programming two of the buttons on the Xbox One ChatPad that it announced and released last year. This is done directly from the Settings area instead of the accessories app for some reason. 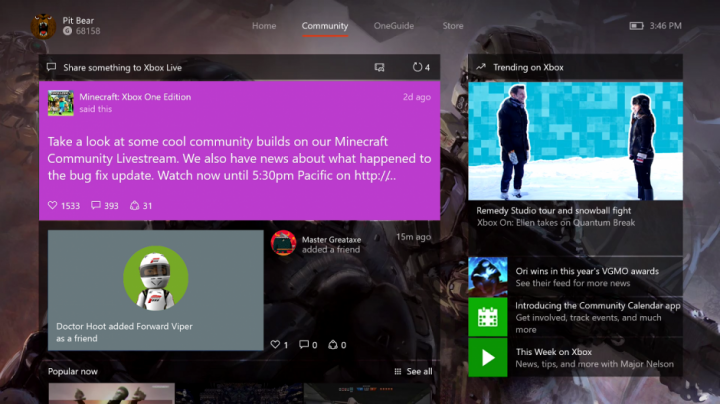 The Avatar Store makes its triumphant debut in the February Xbox One Update too, but it’s not an entirely new feature. The Xbox 360 had an avatar app store of its own that Microsoft dropped in earlier versions of the Xbox One’s software for whatever reason.

All Xbox One owners will get the February Xbox One Update free of charge. Those with the console’s Always Connected mode turned on will get updated when they aren’t using the console. Anyone with the feature turned off will have to manually update their console the next time they attempt to connect to Xbox Live. 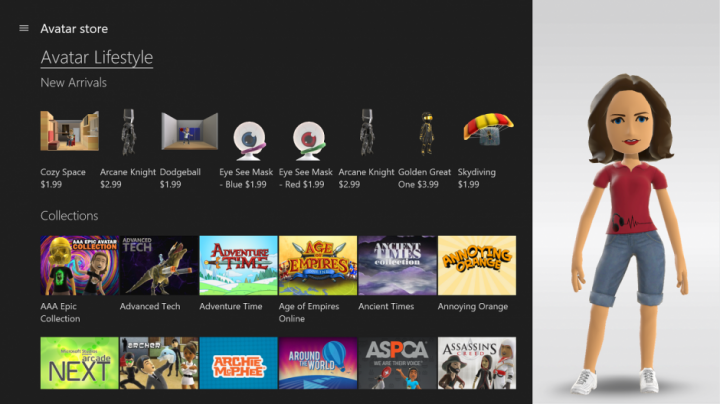 Members of the Xbox One Preview Program have had the February Xbox One Update for sometime now.

The company hasn’t said what will be in the March Xbox One Update, if there is one. Presumably, we’ll hear more about new features and software update at next week’s Xbox One Showcase. Microsoft will show off new content for Xbox and Windows 10 on February 25th.