If you take a break from the busy World Cup 2014 Schedule, you can turn on FIFA 14 to play the World Cup 2014 highlights and put yourself in control of the games.

FIFA 14 came out last fall but a free update for the popular soccer game adds World Cup 2014 mode that put the teams playing in Brazil on your game console for fun co-op play and a multitude of World Cup 2014 highlights that you get to play through to see if you can deliver the same result as the best soccer players in the world.

After playing through the FIFA 14 World Cup mode with random teams for the last week, we finally have an opportunity to play the World Cup 2014 highlights. After the Brazil Croatia match FIFA 14 updated to put players in control of Brazil, down 0-1 after an own goal roughly 11 minutes into the match. The lineup, yellow cards and timing are exactly as they were in the real game, putting gamers in control of Brazil’s destiny. 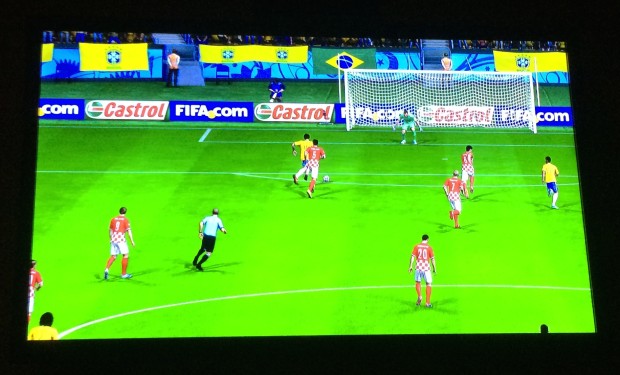 If you want to play the FIFA 14 World Cup mode you will need FIFA 14 for the Xbox One, PS4, Xbox 360, PS3 or PC. If you want to play on your iPhone or iPad there is also an app that offers a similar experience on the go and an Android version with FIFA World Cup 2014 games to play as well.

If you are playing on the iPhone, iPad or Android make sure you download the app and update to the latest version. After you get the game installed and updated you should be ready to play the World Cup 2014 matches on your mobile devices.

For users that own FIFA 14 on a console, simply update to the latest version, something many consoles do automatically, and you will see a World Cup 2014 section with teams, World Cup Challenges and a FIFA Ultimate Team Mode with World Cup players available.

If you want to play against a friend there are World Cup friendlies that include the rosters and teams playing in the real World Cup 2014 matches right now. 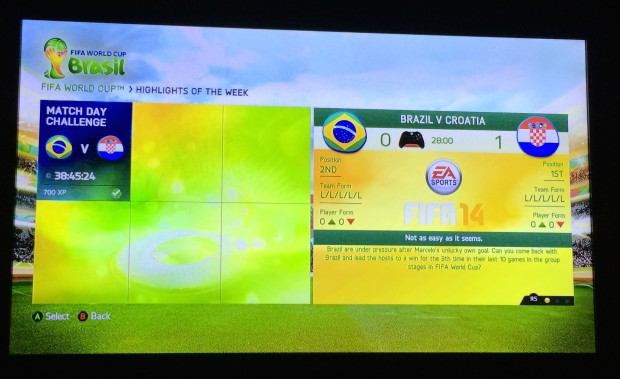 Pick a World Cup Challenge in FIFA 14 to replay the World Cup games from that day.

The World Cup Challenges section is more interesting as it lets you replay the World Cup 2014 highlights that take place during the games that day. You don’t need to play these challenges the same day, but after the matches end the challenge will appear to put the player in the place of a team that needs to come back or to keep the competition from scoring an equalizer.

If you don’t already own FIFA 14 you can buy it for $39.99 from Amazon on all major consoles with quick delivery. The Microsoft Store also sells the Xbox 360 and Xbox One versions for the same price with a mini soccer ball as part of a World Cup bundle.  There is also a special FIFA World Cup 2014 version for the Xbox 360 with improvements to the game, but you don’t need this version to play the World Cup Challenges.

The World Cup 2014 games run through July 13th and are televised on ESPN and ABC in the United States, with additional coverage on Univision. If you have a cable subscription you can watch the World Cup on most mobile devices, but if your provider is not a member of Watch ESPN you may need to make your computer appear as if it is in another country.

For users that can’t watch live, we also share five ways to follow the World Cup from your iPhone, iPad and Android so you can know the schedule, scores, standings and latest news about the competition as it happens.