The FIFA 15 release arrived this week delivering an upgraded game of FIFA to soccer fans across the globe. After a fun experience on FIFA 14 we wondered how EA Sports could deliver a better soccer game for the PS4, PS3, PC, Xbox One and Xbox 360. After playing the computer and a friend, here are the things that stand out in the new FIFA 15 release.

We’re still playing through the full game, but here’s a look at our early FIFA 15 review based on how much fun the game is and hoe the much touted new features live up to how the game performs in our hands.

This short FIFA 15 review is on the Xbox One release, but if you are playing on the PS4 the features should be the same. FIFA 15 on older consoles may deliver a similar experience, but not everything will match up.

Here are five exciting new FIFA 15 features that help deliver fun, exciting and sometimes frustrating gameplay as the opponent comes back in the last minutes.

Thanks to the power of the new consoles FIFA 15 delivers more realistic player physics. Instead of players bouncing off each other, a collision results in a change of direction, a fall and sometimes a red card. Overall this is more realistic and it adds to the gameplay significantly. 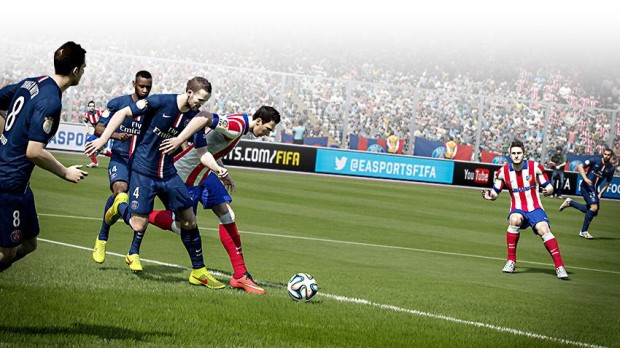 Better player physics are just one area we look at in our FIFA 15 review.

Sometimes your own player will run into a team-mate and send both tumbling to the pitch, and other times you’ll be able to push-off a defender to get the small edge you need for a breakaway goal.

When you play in rain the players move a little slower and certainly cannot stop as fast as on dry ground or in FIFA 14.

You need to adjust to the new player physics in FIFA 15 before you really grasp the changes and can appreciate them, but once you do it’s awesome.

When you take a shot the ball in FIFA 15 behaves more like a soccer ball in real life. Shots that would have ricocheted off the post into the field of play now react more realistically. Catching the inside of the post may deflect into the goal for a scream-worthy score.

Other times the shot will hit the upper edge of the top bar and send the ball sky-high, leaving an opportunity to finish for a goal while a confused keeper scrambles.

Similar ball physics also make passing more realistic with the ball slowing in a smoother fashion and scuffles for the ball offer more of a challenge.

Smarter Keepers, Most of the Time

EA made a big deal about the revamped goalkeepers in FIFA 15 and for good reason. Overall the new FIFA 15 goalkeepers are smarter.

You’ll see this when they run out to challenge a breakaway or a ball cleared downfield. Sometimes they’ll even run out of the box to take control instead of sitting back and waiting for the opponent to turn it into a one v. one scoring situation.

With more aggressive challenging you’ll also experience odd reactions where a keeper charges at the wrong time, leaving a hole to the goal. This is frustrating, but keepers do make mistakes.

The most annoying part of the new FIFA 15 goalkeepers is that there are still times where their actions don’t make any sense and it becomes clear that the advanced AI still needs some small tweaks.

After playing a half in FIFA 15 the pitch looks like you would expect in real life with marks from cleats and slide tackles. In the rain the ball and player feet kick up small water particles as you race downfield.

The player models look better than in FIFA 14, and it’s not just the replays and celebrations. During the FIFA 15 gameplay all the players on the field look noticeably better.

In FIFA 15 you can easily call up a tactic on a corner or use the Kinect to shift from defense to all out attack. While on a run towards goal team mates still don’t always open up and create space, and sometimes they don’t even show up at all, but for the most part your team is a little smarter.

While taking a corner you can use the D Pad to select a tactic that sends players crashing to a post or to the keeper opening up scoring opportunities. By combining these tactics and refined headers, scoring off a well placed corner is a little bit easier than in FIFA 14.