Ahead of the Star Wars Battlefront release date happening this November, we’re learning more about Fighter Squadron Mode and the amazing ships and mechanics that’ll make it come to life for Xbox One and PS4 gamers.

Video game developer DICE and publishers Electronic Arts announced the Fighter Squadron Mode details this week during Gamescom 2015. Besides sharing news of the mode, the two also posted video of the mode in action on its website. 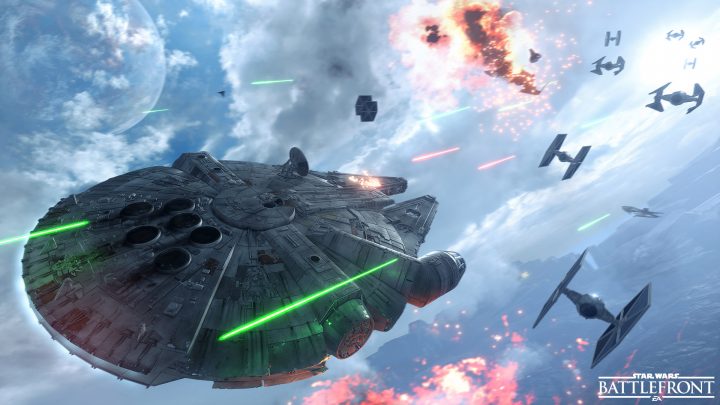 Fighter Squadron Mode in Star Wars Battlefront is where players turn to for vehicle combat when they’re looking for something to supplement their planetary experiences. The mode starts by paring off 20 users into two teams in the game’s multiplayer experience. Joining them are random fighters allied with the Galactic Empire and the Rebel Alliance. These battles don’t take place in space, but rather on the planets in the game themselves. Space battles are missing from Star Wars Battlefront, but some of the most iconic ships from the series of films, shows and games aren’t. Players can look forward to controlling X-Wings, A-Wings, TIE Fighters and Tie Interceptors. Each ship will have both missiles and laser canons.

With current-generation consoles allowing for 20 human players in Fighter Squadron Mode, DICE is turning to game controlled ships to make the battles feel truly epic. They’ll both assist the player and defend enemy teams when they’re in a trouble. Fighter Squadron Mode is a race to kill, with the win going to the first team that can rack up 200 kills. If no one hits 200 kills the game ends, with the win going to the team with the most kills. Shuttles with troops on-board will need to be protected from enemies during these battles.

Power-ups are available for each battle and getting them is the difference between piloting the Millennium Falcon and Slave-1 ships. Called “Hero” ships, by DICE, each has improved attacks and defenses when compared to other ships in the game. The Hero ships alone are must-have experiences for true Star Wars fans.

As a while, Fighter Squadron Mode looks like a worthy addition to Star Wars Battlefront even if it isn’t set in space. Earlier this year DICE and Electronic Arts confirmed that Star Wars Battlefront wouldn’t feature any space combat. Though that’s certainly a shame, the game’s well-done scenery and graphics could more than make up for that.

Coming November 17th Star Wars Battlefront will compete with this falls most promising first-person shooters for supremacy ahead of the holiday season. Primarily, the game is multiplayer focused. Users can play as a member of the franchises’ two main factions in some of the most iconic battles ever seen in the Star Wars universe. Everything from giant AT-AT robots to Darth Vader is included in the game.

Electronic Arts is betting on amazing visuals and a great multiplayer experience being enough to over power Call of Duty: Black Ops 3 and Halo 5: Guardians. Both of those games are due out around the same time.

For games who aren’t big fans of Fighter Squadron Mode there are others coming. Blast, is a Team Deathmatch mode that DICE and EA unveiled recently for Star Wars Battlefront. It’ll also have multiple locations and power-ups for players.