Video games have become a huge cottage industry for users. Whereas users needed to have a decent gaming PC or a gaming console to experience the wonders of titles like Grand Theft Auto or Halo, today, video games are everywhere, including your smartphone and tablet.

As video games expanded to more and more devices, so too have the social issues that have always plagued them. The biggest of these issues relate to the content of video games themselves. Parents who often hand over their smartphone, or head to a store to purchase a video game for their child without doing research, frequently find themselves asking that same child about the content of that video game. That’s not an ideal situation to be in, especially since that child has an interest in not sharing any information about content in a game that they know their parents won’t find appropriate.

Here’s how to find out if a video game is right for your kid before it’s already on its way to your home for the holidays.

Know Who to Ask

The easiest way to determine whether a video game is safe for your child is to check with other parents and read reviews for games before purchasing them for your child. Though you can easily do this by just asking in person, CommonSense Media reviews games and actively tracks information that parents need to know.

For example, CommonSense’s What Parents Need to Know area chronicles if the title is age appropriate, and how much content there is in the game for kids to learn. The site also includes a less detailed review of each game that are written in a way in which non-gamers can understand what the game is about.

The ESRB rates many of the world’s best-selling games on every platform.

Even if you do know parents with knowledge  to share about the video game purchases they’ve made for their child, it’s not a bad idea to judge each video game your child purchases on its own merits yourself. The easiest way to this is by learning about the Electronic Software Rating Board’s rating system. Every game available in the iTunes App Store, the Windows Phone Store, Windows Store and games you purchase at retailers is required to have a rating level where parents can see it.

Although the ratings used by iTunes seem specific to Apple, nearly all other titles are judged by the ESRB. The organization then assigns a  rating ranging from “E for Everyone” to “Adults Only.” This rating is always on the front of whatever titles you buy from a retail store. They’re also available on the game description pages of the online stores for the Wii U, Xbox 360, Xbox One, PS3 and PS4.

Parents don’t have to head to the ESRB’s site before they leave home. The organization also offers its ratings through native applications for iOS, Android and Windows Phone. 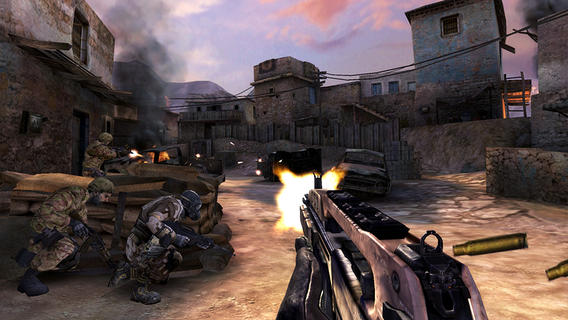 Know your child’s maturity level so that you’re better able to judge if they are ready for violent games like Call of Duty.

Finally, the best way to judge if a title is right for your child is to simply know their maturity level. Though ratings and other’s opinion can help greatly, only you can decide if your child is ready for a game like Call of Duty. If they’re easily influenced and a particular game has play mechanics you aren’t comfortable with your child experiencing, don’t buy the game.

For example, some children are mature enough to know that Ryse: Son of Rome’s violent game play is just that, game play. However, some children might not be able to make that distinction. Knowing and adapting to your child’s emotional development and maturity level is the best way to let them experience the wonders of video games, while protecting them from subjects you feel they aren’t ready for.

No matter what way you decide to learn about video games, you have to get involved. Blindly handing a child a video game without checking to see if the subject is appropriate is a very bad idea.