Film Makers Edit on iPad 2, Plan to Shoot With It

Majek Pictures, makers of the iPhone 4-shot action series Goldilocks, put the iPad 2 and iMovie to the test, shooting episode 9 of the series on the iPhone 4 as before. This time they edited it on the iPad 2 using the new iMovie editing app from Apple. The result is pretty impressive.

They didn’t get the iPad early. They just worked really fast. You can enjoy the series online or through their iOS app. We interviewed the creator and director Michael Koerbel and Anna Elizabeth James over at Notebooks.com, our sister site a while back, so we decided to ask them about using the iPad 2 this time around. 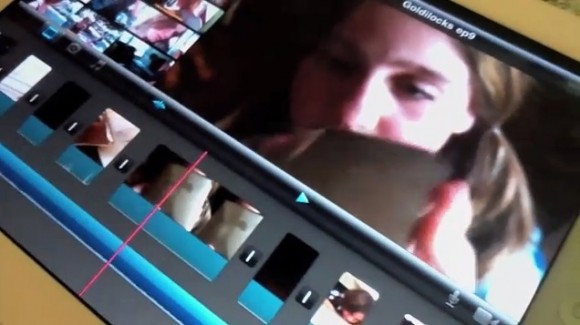 They were clearly excited about the new possibilities that the iPad 2 and especially iOS 4.3 bring to film makers like them. Michael glowed over the potential use of AirPlay to show their Goldilocks series through Vimeo, YouTube or their soon to be updated Majek App (update will include AirPlay functionality).

Seeing Goldilocks on the big screen without wires and cables is super exciting and gratifying.  Deep down it’s every storytellers wish – to have our stories on the big screen and this is a huge leap forward for us in that direction.  As filmmakers you used to have two options on getting your content to a big screen – festivals or studios.  But that’s changing now and its such an exciting time to be in the world of visual storytelling. (Michael) 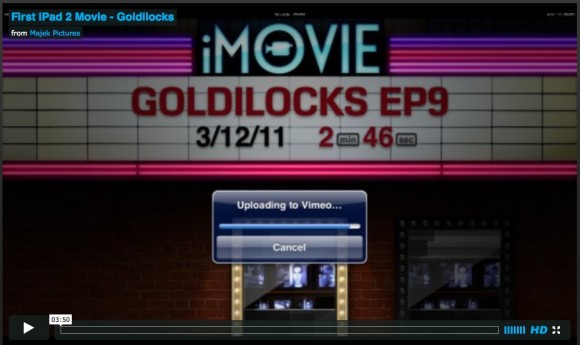 When asked about editing on the iPad versus on the iPhone, Michael said that, while the iPhone made editing “doable,” the iPad allows you to “use all ten fingers if you’d like.” In other words it is just more efficient with the extra screen space. Anna said, “It still has a long way to go …” Both agreed that it was easier than using iMovie on the iPhone 4.

For the average user, they agree that this makes mobile video editing easier.

iMovie is going to be super fun for ANYONE to pick up and use – it’s very intuitive – Apple also included a FAQ screen in the app that explains all the features and finger gestures to split and trim clips. (Michael)

In the above video, the intro scenes were edited by Anna. Their editor, Fawaz Al-Matrouk, did the actual episode. They had a lot of the scenes finished before launch day last Friday. They transferred the video from the iPhone 4 to the iPad 2 via the Apple Camera Connection kit and a USB cable. It went in her words “seamlessly well.”

I asked why they didn’t shoot from the iPad 2 now that it has a camera. As expected the camera quality was the issue. Anna said:

The iPhone4 camera definitely gives a better image than the iPad 2, but we still found it to be successful.  The last three clips of the intro were shot with the iPad 2 camera.  We’ve already shot the season finale on iPhone 4’s, but we will be using the iPad 2 for an extra special shot which we’re filming next week. (Anna)

That will be exciting to see the results. We’ll bring them to you as soon Majek releases it. Below is their first iOS project, Apple of My Eye.

We wanted to know what they wished was different about iMovie on the iPad 2. First, here is what Anna liked. She was impressed with the feature set they’ve included. And having four tracks for their film’s audio was a plus. She hopes that in a future release they can have two tracks for video. The tracks are the lines of either video or audio content. Having more than one means the editor can overlay multiple audio sources – for example a musical track behind the dialogue in a scene.

She is excited about the benefits of the iOS platform for her company.

I’m pleased with what Apple has done for the independent filmmaker so far. They’ve not only given us the tools to shoot, edit, and upload on the fly – but they’ve given us our own distribution platform.  We’re grateful for the advancement of this technology and want to continually push it to its limits.  Art pushes technology and technology pushes art. (Anna)

We look forward to seeing all the great content that comes from Majek and their innovative uses of technology for creating film. Be sure to get the free Majek app so you can see all of the episodes of Goldilocks.