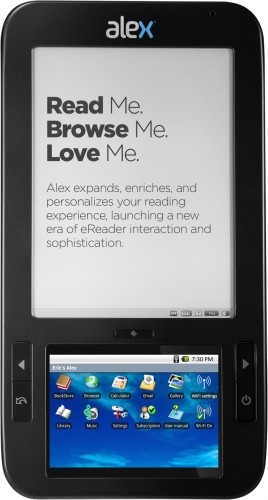 After all the delays that the Spring Design Alex e-reader has gone through, its finally time to pre-order!

To recap, the Spring Design Alex e-reader was a favorite at CES 2010.  Its a dual screen e-reader running on Android.  One screen is color and is used for the menu and controls.  The other screen is for the ebooks and running other applications. According to Spring Design, the Alex will be able to read ebooks, watch movies, listen to MP3s, run Android apps, surf the web and use all of the favorite social media apps like Facebook and Twitter.  All in all, sounds like a great device.  And now, we can finally order one.

Well it’s about time, Spring Design! After missing its February ship date, the company is finally ready for you to whip out the plastic and pre-order its Alex — that dual-screen, Android-based ereader we liked so much at CES. While you can shell out the $399 today, you’ll still have to wait until mid-April for the mailman to drop off the package. We’d like to say the wait stops there, but we’ve also learned that early buyers won’t have access to the promised Borders eBook store until June. When we chatted with Spring Design CEO Priscilla Lu last week she confirmed that Borders will officially launch its store in the “June time frame,” which will be around the very same time that the 3G version of the Alex will be ready to hit the market — at least there’s access to Google Books and an micro-SD card slot for sideloading in the meantime.

Ok, so while we can order one, it still isnt quite ready for prime time.  It will be interesting to see what early adopters and other techies think about this new e-reader.  Will it be able to stand up to the iPad, the Kindle and the nook?

NOTE: As of this posting, the link to the Spring Design Alex shop is still stating that they are almost ready.  We’ll keep checking back and let you know when the store is live.