Yesterday, a rumored RIM 2012 roadmap revealed the company’s plans for 2012 and beyond. However, there was no hard evidence to back up the claims. Today though, BGR has released the goods and what we see are a bunch of BlackBerry Curve devices, a 3G BlackBerry PlayBook tablet and a possibility that we won’t see a BlackBerry 10 smartphone arrive until October.

The leak reveals quite a few devices but the one that we’re most intrigued by, and we’re sure that sentiment is shared by many of you, is the BlackBerry London. The London is rumored to be RIM’s first BlackBerry 10 powered smartphone and just yesterday, we heard that it would be coming in September.

This roadmap reveals that to be the case, that RIM has the phone slated for a September release, but it also looks like it could be pushed back to October. 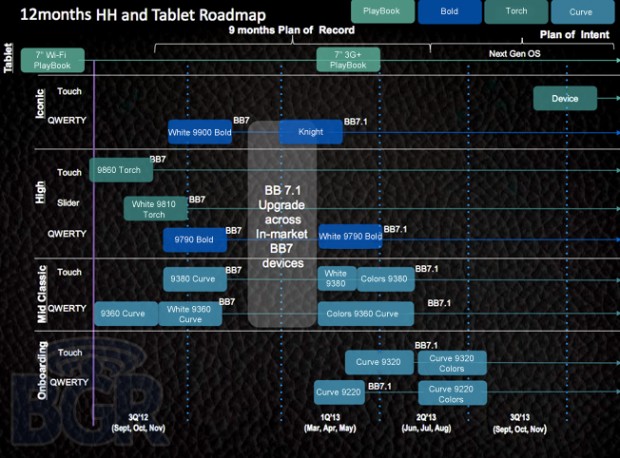 So those of you looking to hop aboard the BlackBerry 10 train might find yourselves waiting for a solid 10 months before you’re able to get your hands on a piece of hardware.

For those not interested, RIM has a few other devices that may tempt you along the way, none of them running BlackBerry 10.

So that’s what’s in the pipeline for RIM it seems.

Not quite as busy as year’s past.