With the tablet market (or, as some would call it, the iPad market) getting most of the attention, it’s easy to forget about the eReader wars. The Kindle is still the most famous, but Barnes & Noble’s recent reboot of the Nook (along with the tablet hybrid Nook Color) has been turning a lot of heads as well. And don’t forget about Borders and Sony shooting their own e-ink devices onto shelves too. Starting soon, a whole new door will be opened – readers powered by the Google eBookstore. 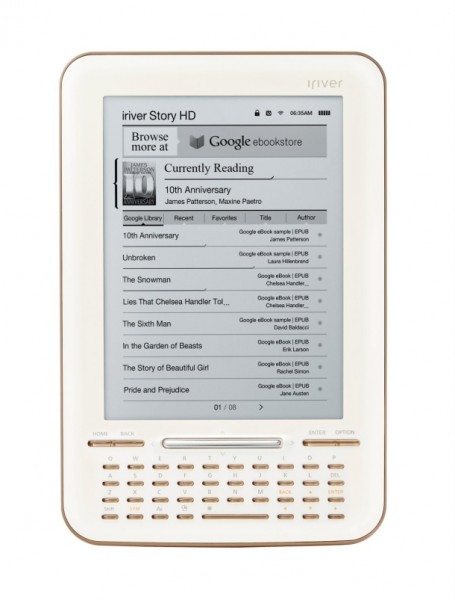 The first of these devices is the iRiver Story HD. If you mistook it for a Kindle, we wouldnt’ blame you – as the design is nearly identical. The reader’s biggest draw is its crisp display, which the company touts as “highest-resolution 6-inch e-reader.” That’s no hollow boast either, as it sports 1024 x 768 resolution. The Kindle’s resolution, by comparison, is 800 x 600. That gives the Story a pixel density of 213, compared to the Kindle’s 167 pixels per inch.

Whether any of this will translate into sales remains to be seen, as we haven’t heard too many people saying they wish their Kindles had a higher pixel density. Additionally, touch e-ink displays – as seen on the latest Nook – appear to be the direction these devices are going. While the Google eBookstore has quickly established itself as a quality competitor to the Kindle Store and Apple’s iBooks, it hasn’t taken off in popularity to the same degree as those platforms (the lackluster sales of Android tablets haven’t helped in that department).

What this does signify though is likely an upcoming wave of eReaders that will be powered by Google’s service. While only Amazon can make a reader that uses Kindle books, any device that makes use of the Adobe eBook platform can read Google eBooks. This already includes the Nook and Sony’s Reader, but opens the door to many more readers down the road. Just as you’ve seen every manufacturer under the sun making an Android phone, we could soon see a slew of eReaders marketing themselves as Google Readers.

While it hasn’t quite taken off in mass adoption, we have found the Google eBookstore to be worthy of consideration. It houses well over 3 million books, and also has corresponding apps for other mobile platforms that will sync your last read page. In other words – it does most everything that the other platforms’ stores will.