Rupert Murdoch’s attempt to change journalism on Tablets debuted today on the iPad. Called The Daily, it probably should be called the Yester Daily given the currency of the news, at least in the debut issue. There are some big stories out there in the world of news including Egypt, the snowstorm hitting the US and oh, yeah, the Super Bowl coming up. At a very fist glance there is nothing new in this first edition on any of those stories that would make me want to pay for it. All of what’s written about those stories is essentially yesterday’s news.

The Arts & Life section in this first edition is more about fashion than arts although there are a few movie reviews and an article on the film Portlandia and an interesting piece on Bollywood films and their impact in the Muslim world.

The good news is that you can try The Daily out for two weeks thanks to Verizon before deciding if it is going to live on your iPad or not. I’ll give that two weeks a try and hope that things become more current on the one hand, and also more in depth on the other. The reason for that last statement is really a matter of my personal preference. If I’m going to pay for a magazine, I want more depth than what I can get from those that kill trees currently.

Perhaps one day, those trying to push these magazine like Apps will figure that out.

I’d also like to know how much bandwidth each day’s download eats up. On WiFi it took much longer than I’d like for something that is to be downloaded each day. (They do say WiFi is faster than 3G.) But given broadband caps, the very gorgeous artwork and other content, I would imagine bandwidth will become a premium if you’re going to use The Daily each day. 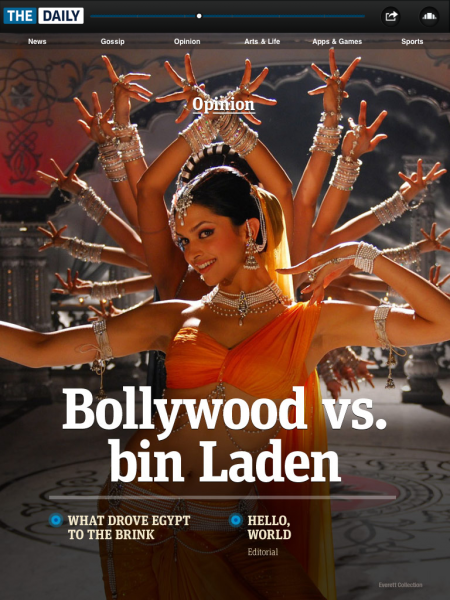