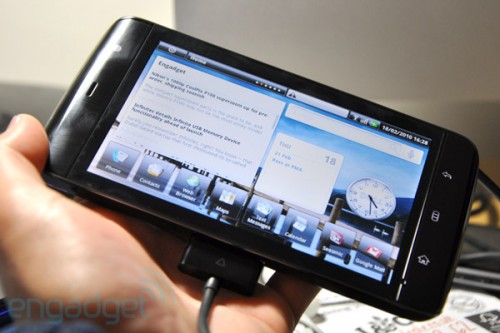 Engadget has been putting their comment-ambivalent paws on a prototype of the Dell Mini 5, a.k.a. the Streak, and have returned their early first impressions of the MID, along with a truckload of photos and video.

While I appreciate the sheer volume of data they’ve delivered, I think they spent a bit too much time trying to satisfy the spec-lovers. The model is a prototype. The software is not final. The specs are open to change. In other words, don’t take any particular detail as hard truth. For something like this, I’m more interested in knowing whether it’s something I would carry with me, and here Engadget does not disappoint with the insights.

Understandably, most people are concerned about whether this 5-inch tablet would fit inside their pocket. We’re happy to tell you that it snuggled nicely in our jeans’ pockets, which is most likely to do with the device’s sensible thickness and our lack of tight pants. Apart from the slight exposure (as pictured below) and the occasional struggle when walking up stairs, we’ve had no other issues with pocketing our Mini 5.

I personally would not carry this in pants pocket anyway, opting for a jacket pocket, holster or side pack instead, but whether it could be carried in a pocket is critical knowledge when picking a mobile device. Thanks for paying attention to that detail and also showing how it looks when held up as a phone (pretty good, actually). Hit up their post for more details.