Halfbrick, the creators of Fruit Ninja and Jetpack Joyride have a new game for iOS that’s all about skipping fish called Fish Out of Water.

In Fish Out of Water players try their best to skip a collection of fish on top of an ocean as far as they can. The basic premise is simple, but with seven different fish that each skip differently the game is surprisingly deep. After skipping three fish across the water a panel of five crabs judge the performance based on distance, skips and the weather. 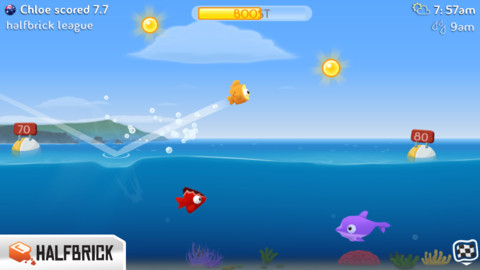 In clear skies the water is relatively calm and skiping fish is easy. The weather in the game changes every hour, however, and the game becomes more difficult in the rain or when tidal waves come in. Weather affects are the same for everyone playing the game, so everyone who plays at the same time can the same chances of getting a high score.

Players can choose to join a league to compete with their friends (or strangers) for a high score while also competing with other leagues. Every day there is a leaderboard to see who has the highest score within the league as well as a leaderboard to show which leagues has the best cumulative high scores. It’s a nice bit of competition, only leagues with many games will make the top ten leaderboard.

Like Halfbrick’s last game, Jetpack Joyride, Fish Out of Water has a number of challenges that players can choose to complete. Every three challenges the player completes gains them a level and crystals that can enhance their game (players can also buy the crystals with in-app purchases).

Every level also comes with a picture that tells the story of the seven fish in the game, so players learn more about each one as they play more.

Fish Out of Water is now available in the iOS App Store for $0.99, and is well worth the price.