The Fitbit Aria is a WiFi scale that is very similar to the popular Withings scale. It’s not necessarily related to mobile tech, but the way I am using it and the Fitbit Ultra in combination with my Galaxy Nexus is.

I am using all the tools I have at my disposal to track my progress on the road to getting healthy. I plan on sharing more about the big picture soon, but for now, let me tell you how nice the Fitbit Aria WiFi scale is.

The Fitbit Aria is a WiFi enabled scale that does more than weighing you and your family, the Aria’s glass surface contains electrodes that send a small, safe signal through your body to measure body impedance, giving you accurate data on your body’s fat and lean mass. Comparing my results with the results obtained using a formula that we used in the US Navy to check body fat percentage, it’s pretty close. 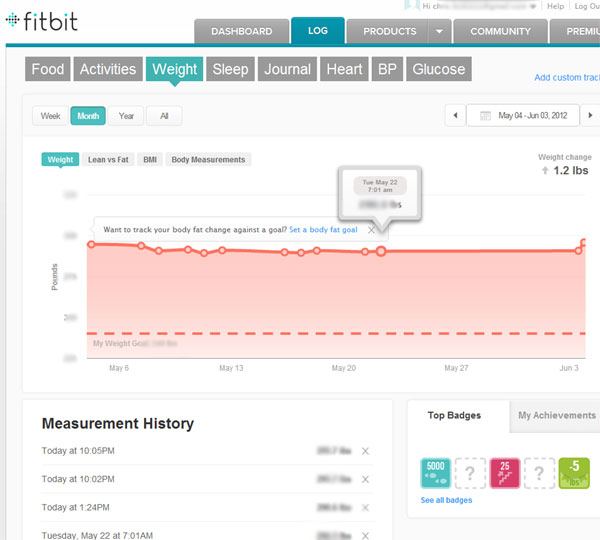 The Aria takes the data recorded and transmits them via WiFi to the Fitbit website to track progress. In addition, the data sent to the web can be shared, imported and used in other applications including Fitbit’s own app. As you can see from the screenshot from the Fitbit.com website, I went a couple of weeks without weighing in. The website displays your measurement history and a graph showing progress. I have been using the Fitbit Aria for a month or so now and haven’t had much of a change in my weight over this time, but if you use the website and graph as a motivator, It makes it fun to track it. Instead of trying to remember what you weighed in at last Friday, you can just check out the website. 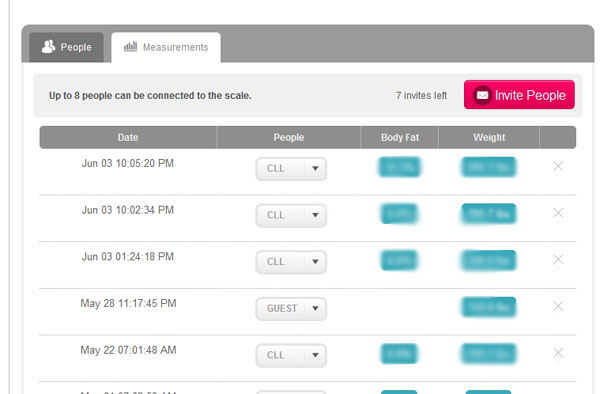 The scale allows multiple users to track their weight as well. As you can see in the screenshot above, I can invite 7 more users to track their progress on this scale. You can also see that someone else used the scale between my May 22nd weigh in and June 3rd weigh in. They are labeled as guest and I am labeled as CLL, a tag that was set when I 1st set up the Fitbit Aria.

The Fitbit website takes data from the Fitbit Ultra (step counter) and the Fitbit Aria and provides several ways for your to make your weight loss and fitness goals fun and easy to track. There are badges that are earned for reaching milestones as well as the ability to share information for motivators with friends online. I share my information with Facebook friends and friends on the Fitbit website. Looking at my badges, I am motivated to try harder since I have very few. Look at Foursquare, Xbox Live, and other services that give badges and you’ll see that badges get us motivated. 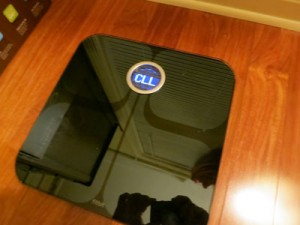 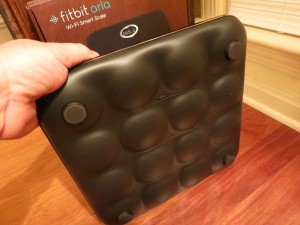 The Fitbit Aria has an LED display that lets you know what is happening during the process. The surface is ~1/3″ glass surface that is easily cleaned and has a good feel to it and the base is plastic. There are no buttons on the scale at all. The bottom has a 4×4 grid of round bumps that I have no explanation for. Perhaps they are just for a cool design? In addition, there are 4 padded feet that meet the ground and a battery cover that houses 4 AA batteries that are expected to last at least 3 months with moderate usage.

The Fitbit Aria comes in black and white.

The initial setup of the Fitbit Aria is fairly simple. You have to install the Fitbit software to your PC before connecting the Aria to your WiFi connection. The process is well documented and takes 5-10 minutes and then you are ready to go.

While the Fitbit Aria is calculating your weight, you see a digital display of your weight with the whole number and tenths. After the weight is displayed, it shows the BMI followed by the user that the scale believes is using it. It’s pretty good at that with 3 people that are not close to the same weight but I wonder how it does if there are two users with similar weight. I am guessing it will go to the BMI to differenciate users close in weight. After all the data is collected, you’ll see an arc in the upper part of the display that indicates that it’s being sent via WiFi to the web. When it’s all done, you’ll see a check mark (below). You are done. Now head to the web to check out the numbers! 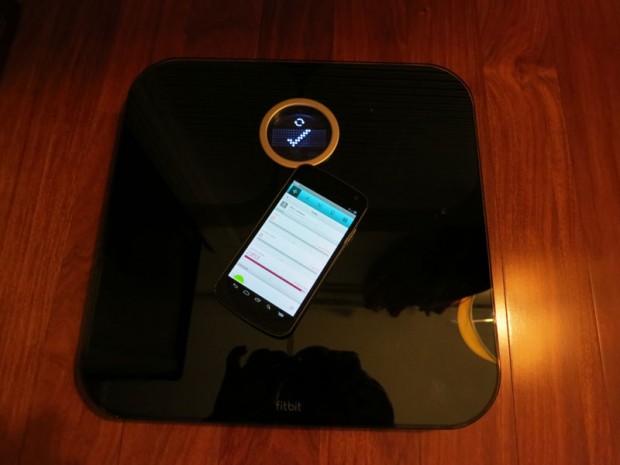 The Fitbit Aria is a bargain compared to similar scales with the same functionality at $129.99. It’s not too fancy, it’s easy to use, and it looks good. What else do you want? The fact that it the Fitbit apps for iPhone and Android work well with the Aria and Fitbit Ultra makes it a great extra for tracking and achieving your weight loss goals. I have really enjoyed using the Fitbit Aria and doubt I will ever own a regular scale again.

The Fitbit Aria can be purchased direct from Fitbit in white or black for $129.99 with free standard shipping.

Stay tuned for my review of the Fitbit Ultra and an article about how I use them both along with other apps on my Android phone to get the big picture!