Fitbit was demonstrating its new Fitbit Flex fitness band at the Consumer Electronics Show and we were able to take a closer look at the device. With New Year’s having just occurred, health and fitness was a big theme of this year’s CES and Fitbit is hoping that its new fitness and health accessory would inspire people to keep their resolutions for the year.

The Fitbit Flex is an accessory that you wear around your wrist and combines some of the features of the Fitbit Ultra in a form factor of the Nike+ Fuelband. According to company reps, the wrist band should be able to hold its charge for around a week, which means that you don’t have to take it off your wrist frequently to recharge the battery. 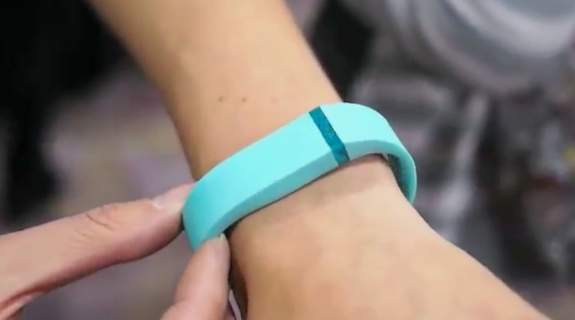 Similar to Nike’s Fuelband, the Fitbit Flex has lights that light up depending on how much activity you have during the day. Take more steps, walk more, and stay more active and you get more lights that turn on like on the Fuelband. The Fitbit Flex, which costs $50 less than the competing Nike product, doesn’t display more information that this, however, like time and calories burned. For more detailed information, users would need to connect the Flex to an Android or iOS device via an app to track their activities and get notifications and alerts regarding their daily fitness plans.