The new Fitbit Flex is the company’s first fitness tracker that users wear on their wrist instead of in a pocket or clipped to an article of clothing. Like the recent Fitbit One the Fitbit Flex tracks daily movement in terms of steps, calories burned, and stairs climbed. The device can also track users’ sleep patterns to help them better understand the quality of their sleep.

Unlike the Nike+ Fuelband and recent Fitbit devices, the Flex doesn’t have a display to show exact stats or the time. The device does have, however, a series of five LED lights that show the user how close they are to their goal of daily steps. 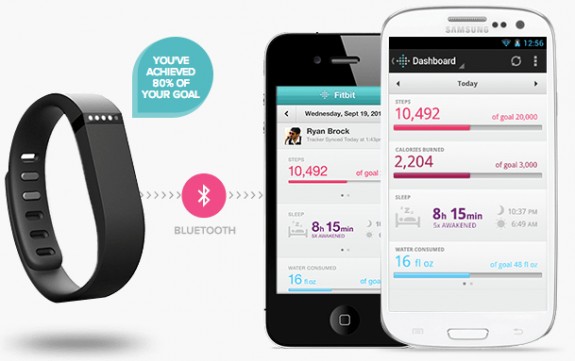 The Fitbit Flex wil sync to iPhone as well as the Galaxy S3 and Galaxy Note 2.

The Fitbit Flex also syncs to devices in real-time via Bluetooth so users can find their exact number of steps, calories burned, and stairs climbed on their smartphone.

The Fitbit Flex comes in a variety of colors, unlike the Nike+ Fuelband which only comes in black and clear. Users can choose from slate, black, teal and tangerine bands for the Flex, and can buy replacement bands so they can match the bracelet to their mood or outfit.

The Fitbit Flex marks the first mobile fitness device that links to any Android device, even if it only syncs to two phones running the OS. The Galaxy S3 and Galaxy Note 2 are two of the most popular Android devices, however, which means a lot of Android users will get the chance to use the fitness tracker.

Fitbit expects to ship the Fitbit Flex in Spring 2013. Users can pre-order the device now for $99.95, the same price as the Fitbit One.