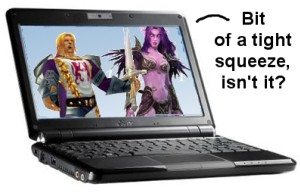 We know UMPCs can run classic RPGs without hassle, but who knew there were recent games capable of delivering adequate enjoyment on netbooks? Liliputing apparently did, and they’ve run down a list of five games to enjoy on the small screen.

The standout entry for me is World of Warcraft. Though the game itself just turned five years old, it is ever-growing and still actively played by millions. I know people who have dropped major coin on desktop replacement laptops for the game, and one guy who lugged his desktop system with him on a trip to keep up with his guild. I suppose they wouldn’t be too happy playing on a small screen with the effects turned down, but it sounds like a real nice alternative to breaking the bank (or breaking your back) to access the game from anywhere.