Did Flappy Bird Cheats & Hacks Play A Role in Removal?

Flappy Bird is gone forever due in part to the addictive nature of the game, which proved addicting enough that over a third of respondents chose to uses Flappy Bird cheats and hacks to get a higher score.

After exploding in popularity earlier this year, Flappy Bird cheats and hacks arrived to help users get a higher score by removing the pipes and allowing players to tap their way to a high score without any obstacles. Other Flappy Bird cheats allow users to simply enter the high score they want in with a keyboard and share it with the world as genuine. 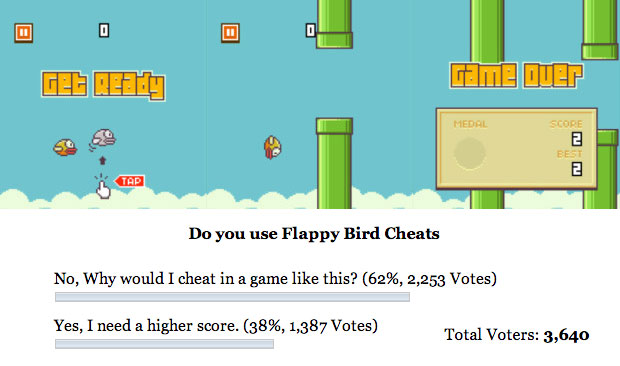 Flappy Bird cheats allow gamers to get a higher score, which many admit to doing.

38% of those who responded admitted to using Flappy Bird cheats to get a higher score, while 62% claim they don’t cheat and don’t see a reason to cheat in a game like Flappy Bird. The poll surveyed readers who landed on a Flappy Bird cheats article during the last three days and may show a slightly increased number of users gaining an advantage with a Flappy Bird cheat due to the nature of the original article.

As it turns out the addictive draw that pushes some games to use Flappy Bird cheats for a higher score may be part of why the app is no longer available in the iTunes App Store or Google Play.

In an interview with Forbes, Flappy Bird creator Dong Nguyen explains why he removed the game from App Stores. Nguyen told Forbes, “Flappy Bird was designed to play in a few minutes when you are relaxed.”

But the game quickly became more than that as gamers pushed for higher scores with Flappy Bird cheats on iPhone and Android and many took to social media to complain about the creator and the game. Many common complaints start with, “Dear creator of Flappy Bird,” and descend into threats, complaints and other angry statements.

In the end Nguyen shares his final reason for removing Flappy Bird, telling Forbes, “it happened to become an addictive product. I think it has become a problem. To solve that problem, it’s best to take down Flappy Bird. It’s gone forever.” The man behind Flappy Bird doesn’t come out and say that Flappy Bird cheats are to blame, but the effort and result of using a cheat does go against his wish to create a game that helps users play for a few minutes to relax.

Users that already downloaded Flappy Bird can continue to play until another game arrives to steal their attention away from the pixelated Flappy Bird world. There is also a version of Flappy Bird that users can play in any web browser and a number of clones and Flappy Bird replacements on the app stores including Nguyen’s favorite Ironpants.