Flappy Bird is dead, but there are quite a few clones out there that allow you to still play the frustrating and addicting game. However, one Flappy Bird clone caught our eye immediately. Terry Cavanagh, developer behind the popular Super Hexagon mobile game as well as VVVVVV, has made a cross between Flappy Bird and Super Hexagon, taking the art style and music of Super Hexagon and mixing it with the gameplay style of Flappy Bird.

The game is called Maverick Bird, and we’ve found it to be a heck of a lot harder than the original Flappy Bird game, although we find it much more enjoyable. The soundtrack is booming and that alone will make you want to keep playing just to hear the beats. 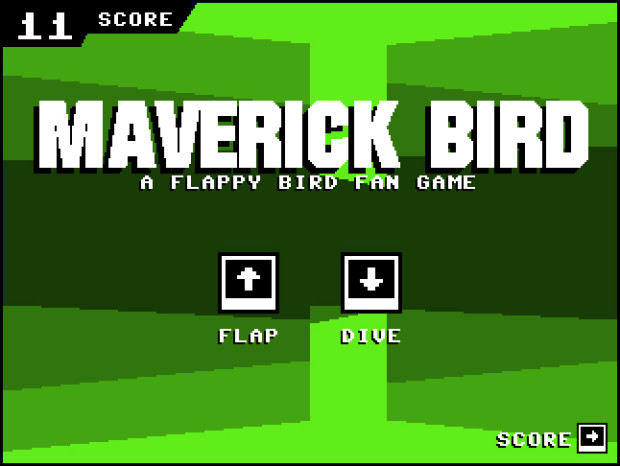 However, in Maverick Bird, there’s an added control that lets you dive instead of just flying. This means that if you’re flying too high and need to get further down to make it through a crevice, you can hit the down arrow on your keyboard to quickly dive down in order to make it through.

The game uses Flash, so you won’t be able to play it on your iPhone or iPad, sadly (unlike a lot of browser-based clones that we’ve seen, which use HTML5), but you can still play it on any computer in any web browser that supports Flash.

It seems Cavanagh was a big fan of the short-lived Flappy Bird, saying “thanks for the inspiration, Dong. Looking forward to your next game when things settle down!” Dong Nguyen was the creator and developer of Flappy Bird, and just days after he released the game, he pulled it from the app store, claiming that he felt guilty that people were wasting time with the game. However, Nguyen was apparently raking in $50,000 every day from ads that would show up in the game.

He certainly must have exceptional feelings for his customers by giving up $50,000 a day just so gamers don’t kill time, but we’re guessing Flappy Bird players will move on and find a new game to waste time with.