It looks like flexible displays may be the hot tech buzz for 2012 as Samsung is reportedly planning to debut a smartphone with a flexible AMOLED display by the end of this year. The South Korean electronics manufacturer is going to start manufacturing flexible AMOLED panels this quarter according to Korean publication DDaily. 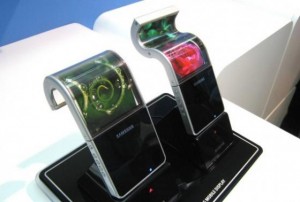 Most recently, the rumored Galaxy Note 2 is expected to debut with a flexible display.

The new panels are said to be extremely thin, roughly half the thickness of today’s non-flexible displays. The screens will have a thickness of 0.6 mm compared to 1.8 mm on today’s panels. The publication says that initial batches of display would still be encased in non-flexible glass. The benefit of this would be either thinner devices in the race to the slimmest smartphone, or devices that are more feature-packed with a larger battery or other components.

In the future, Samsung would introduce displays that are truly flexible and that may open up the doors to new form factors and wearable computing, bringing to life design concepts such as phones and gadgets that wrap around your wrist.

According to The Verge, mass production of these displays, which are called Youm panels, is expected to happen in 2014.

In the past, Samsung had shown off its flexible displays at various trade shows.