Tis the season for holiday travel. Tomorrow, the day before Thanksgiving here in the US, is one of, if not the busiest travel day of the year with millions headed over the river and through the security checkpoints to grandma’s house. The Eastern US is due for a major storm that looks like it will delay or snarl up travel for some.  That’s holiday travel this time of the year and it is always a risk. In good weather or in bad, one of the genre of smartphone Apps that has thrived is airline flight tracking and trip tracking. There are a multitude of Apps available that will read your flight info from your email and give you flight status info, gate tracking, weather at your destination, and other details that can be helpful in what can only be described as a bit of a stressful time. Typically flight change info gets pushed to your smartphone, which can really be helpful to travelers. 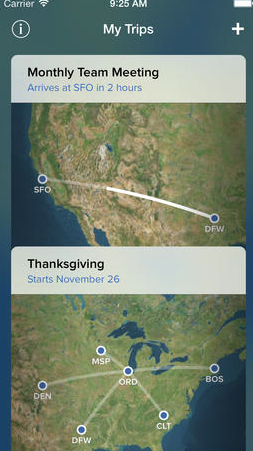 One of the more popular flight tracking Apps for iOS and Android as been FlightTrack by Mobiata. Mobiata had two versions, a non Pro version that cost $4.99 and a Pro version that added syncing with another popular travel App and service, TripIt. That functionality set you back another $4.99. Recently in preparation for the busy holiday travel season, Mobiata updated its Apps for both iOS and Android and combined them into one now called FlightTrack 5. That new App costs $2.99 on either Android or iOS. Sounds like a bargain. And the new versions of the Apps look very nice on both devices.

Well, looks can be deceiving and sometimes a bargain isn’t a bargain. The new version does not include the TripIt integration. For some that integration was a key and well worth the cost of the App. Without it, users had to enter in each flight they wanted to track manually. For others that’s just a another in a long line of first world annoyances.

But the purpose of this post isn’t to put down the folks at Mobiata. It’s to let users who, like me, don’t travel or deal with airports that often know that they might want to hang on to the earlier versions of those Apps if they already have them. FlightTrack Pro is no longer available in either App Store.

In my case, I picked up the new version and still have the old version available. Preparing to travel later in the month, and also to do some airport pickup this weekend, I went to check things out with the new version of the App and discovered the lack of TripIt integration in the new version. Sometimes when something new comes along it isn’t the wisest move to jump quite so soon.

The folks at Mobiata have responded to the complaints from users with a couple of blog posts including one on how to restore past purchases of the previous versions (here’s the iOS link and the Android link.) Mobiata says that they have tested TripIt integration but that they haven’t been given permission to integrate it yet. Here’s hoping that happens some time down the road. But, I’d look for an in-App upgrade fee when that happens.

In the mean time there are other flight tracking Apps on both Android and iOS for you to choose from that do include TripIt support if entering in flight data manually is a real problem for you.