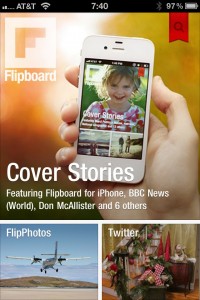 One of my favorite iPad Apps, the Ink Blot Award winning Flipboard has just received an update to version 1.7 that now makes it a universal App, now making it available to the iPhone and the iPod Touch. This is a very cool thing.

Flipboard has been a winner and a must-have App for the iPad for sometime and it has continually improved on an already excellent way to view various your various feeds in a magazine style UI. You can add Twitter feeds, Facebook, and various other feeds to the App. (GBM looks particularly nice in Flipboard.) The iPhone version is an obvious next step. In the prior update Flipboard added user accounts to prepare for this expansion to the iPhone so that you can simply sign in and see all of the feeds you have previously added to the App.

Instead of scrolling side-to-side as you do on the iPad, you scroll up and down in the iPhone version which makes some sense. There’s also a new Cover Stories feature that greets you once you sign in.

Flipboard isn’t just a way to view content. What sets it apart in my view is personal window on to your content you receive when you add what you want to read or view from feeds to photos. There are some suggested feeds from various sources. And in some cases, like the Economist, Flipboard is my preferred way of reading that content. The iPad version makes your Tablet feel very, very personal. And that’s what these devices are all about in my view. It will be interesting to see if the iPhone version becomes as “go-to” an App as its iPad version is.