The iPad was supposed to usher in a new age of journalism, publishing, and other ways to get news-like content into our grubby little hands and advertising money into the grubby little hands of the publishers. In some small ways it has succeeded, but if there is a new age it looks much like the old players are still trying to find their place. Or at least find a way that they can make the new age profitable. One of the small corners in this new publishing world that has seemed to work is Flipboard. A magazine App that allows you to curate your own content from Twitter, RSS, and increasingly from a number of sources that create magazines to be read in the App. Today Flipboard purchased Zite, another news reading App that had been purchased by CNN in 2011. 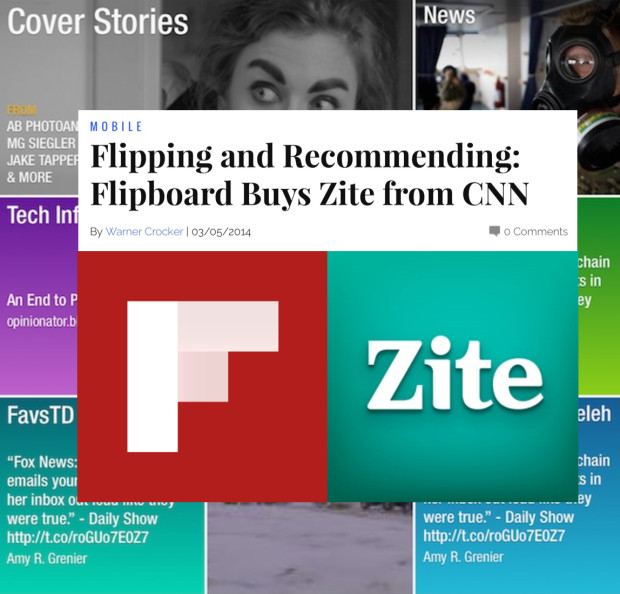 Both Apps serve a similar curation purpose, but the purchase of Zite gives Flipboard a future feature it doesn’t have. That is a recommendation engine. Zite allows you to vote a story up or down. Voting a story up means you’ll see more of that kind of story in the future. Voting it down means you’ll see less. Within Flipboard any type of recommending comes from sharing what you read instead of building a feed or feeds that contains articles that particularly interest you by voting up or down, liking or disliking.

How will that work going forward?  At some point in the future Zite as we know it will cease to be. The technology will be incorporated into Flipboard. There’s no timetable for that as of yet.

Flipboard and CNN have created a new partnership which will feature some of the struggling news network’s reporting, video, and photography in Flipboard news, entertainment and business sections.  There will also be curated magazines from some of CNN’s shows including  “Fareed Zakaria’s GPS Daily,” “The Lead with Jake Tapper,” and “John King’s Go ‘Inside Politics.” Those magazines are scheduled to roll out this week.

Where Flipboard seems to have succeeded is capturing a good mix of content and advertising. Quite frankly, of the various news and aggregation Apps that exist, Flipboard seems to have found a formula that blends advertising and content in a way that reminds one of the heyday of top flight magazines. That said, both Apps have had difficulty when sites they curate want to bring their own advertising into the mix when that often bungles up the user experience.

The fact that the user has control over creating their own Flipboard is a plus. The increasing level of content that is available as Flipboard magazines hints at a robust future when you think of adding a recommendation mechanism for each article. At least at this point.

Having used both Apps extensively since their respective beginnings, my early sense is that this will be of benefit to Flipboard going forward. Both Apps matured in good ways since they came on the scene. I’ve been more impressed with the moves Flipboard has made along the way, and would think the same diligence and attention to the user experience would continue as new technology is folded into the mix.