Fluid Notes for iPad promises a fluid interface for note takers who enjoy inking or typing on their iPad. Download and begin taking notes using a finger, a stylus or keyboard. They app takes its name, most likely, from the promise of a fluid user interface. In our experience the app fails to give users a fluid inking interface and in-app purchases make this free app too expensive compared to other better note taking apps.

Open Fluid and it shows a shelf interface. All new notebooks will show up on the shelf grid. Add new notebooks, set app settings, import notebooks from DropBox, Google Drive or Box, but not Evernote. The app lets users export to Evernote, if they pay for the feature, but users can’t import from Evernote, which mystified us. 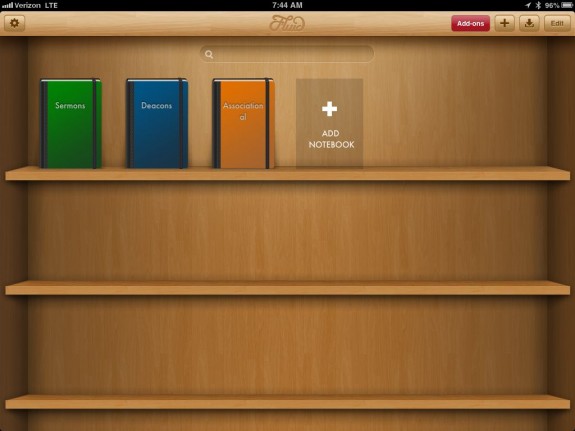 Open up a notebook to see the writing or typing interface. The user can ink with one of a number of inking tools. This includes a Ball pen, Crayon, Eraser, Fountain pen, Highlighter, Marker or Pencil. The app also allows for typing with a keyboard.

The various kinds of ink don’t look different enough to call for all the buttons on the toolbar. The image below shows various kids, but see how alike they are. 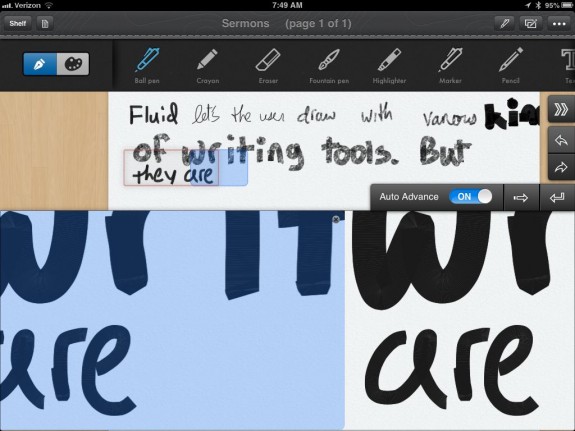 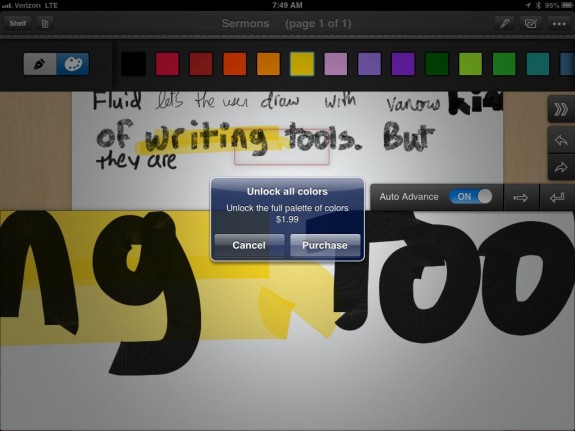 When the user first installs the “free” app they can’t use all the colors, notebook covers or backgrounds. The app requires a $1.99 in app purchase to unlock all the colors. Pay a buck for extra page backgrounds, another buck for music sheet backgrounds and still another for a 2013 calendar. There’s a long list of in-app purchases. Get them all for $9.99, a steep price for an app without more to offer.

The user interface stalls often. The developer needs to optimize it before calling the app fluid. We often experienced lag while inking.

We can’t recommend Fluid. While it’s free, the full functionality will cost more than the app is worth. As a free app there’s not enough to bother with.

Users will enjoy Notability, another inking app with a shelf user interface that costs only $1.99 for all the features that comes in Fluid for $9.99. Also, Notability really is fluid. It’s still our favorite note taking app. See the video below to see if it fits your needs better.