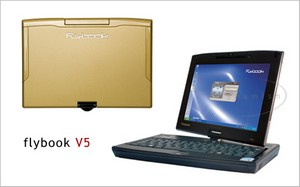 During CES, Matt and I reported on Dialogue’s Flybook V5i Tablet PC. We were promised by Dialogue that it would be out shortly after CES finished. Unfortunately, it has been quiet on the Flybook front ever since, and there hasn’t been much more to report.

Well, thanks to GBM forum member, Johncmd, we just learned that Dynamism has the 8.9” wonder for sale, with prices starting at $2449. They are showing ship times ranging from 2–3 weeks to early May.

As is the case with other Flybook computers, the V5 can be ordered with black, silver, red, or gold. The short amount of time I played with the V5 at CES, I can attest that it is a fantastic ultra-portable, especially with built-in broadband, Core Duo 1.06 ghz, and 2gb memory support.  I’d expect the V5 to give the Fujitsu P1610 a run for the money. Johncmd has written up a good comparison post between the P1610 and V5 if anyone is interested in comparing the two.

Here are the specs, courtesy of Dynamism: