What do Miley Cyrus and Flappy Bird have in common? Well, thanks to Flying Cyrus – Wrecking Ball they are both in top 10 iPhone games that ask users to tap tier way through levels that grow increasingly harder.

The Flying Miley Cyrus – Wrecking Ball game is not as risque, and essentially plays as Flappy Bird, so it is suitable for all ages. 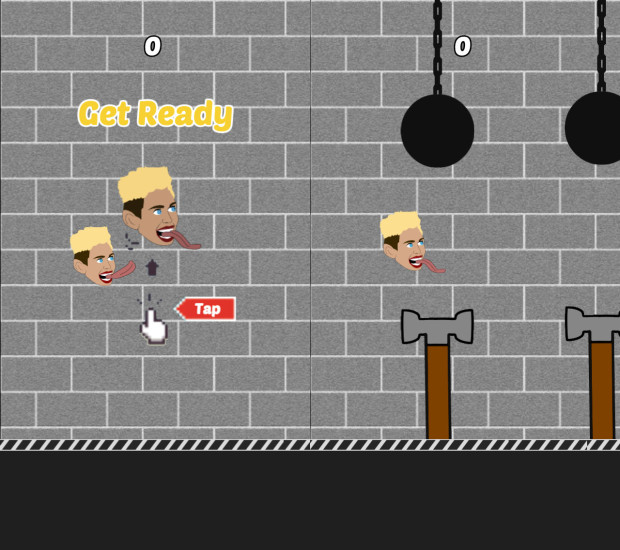 Users must tap to get Miley Cyrus’ head through the wrecking balls and hammers to get a medal and a high score. The character flies thanks to a tongue that sticks out quite far, and can hit the objects users are trying to get past. There are a lot of ads in the game, including one that pops up between every turn.

It is surprising to see Flying Cyrus – Wrecking Ball streak to the top of the charts overnight as Apple clamped down on apps leveraging the Flappy Bird name, rejecting apps that attempt to trade on the popularity of an app. This App clearly relies on the popularity of the Miley Cyrus Wrecking Ball song with a name and app description that mimic the way people often search for music. Likely this falls under the same parody rules that allow paid apps like “Miley Virus” on the app store.

The video above shows the Flying Cyrus – Wrecking Ball gameplay, which is not surprisingly a lot like Flappy Bird or any of the other Flappy Bird clones.

Despite the lack of original gameplay, Flying Cyrus is in the top 10 free iPhone apps right behind Red Bouncing Ball Spikes! and Splashy Fish.

With over 900 reviews the app carries a three and a half star rating and includes requests for Drake and Justin Bieber Flappy Bird games from the creator.

Flappy Bird exploded on to the app scene earlier this month, but the creator pulled the game due to the addictive nature, and likely due to all the attention focused at his public twitter account. Flappy Bird is no longer available to download, but Splashy Fish is a very close remake with a fish instead of a bird.

Flying Cyrus – Wrecking Ball is a free game for the iPhone.