A new app called Focus Twist brings some features of the Lytro Light Field camera to iPhone users who can’t afford the $399 camera.

The Lytro Light Field camera is a unique camera that takes relatively small photos that users can choose what elements to focus on after the photo is taken. It’s an interesting idea, but at $399 for the camera, it’s just not something everyone can use just yet. Focus Twist brings similar functionality to the iPhone camera for just $1.99.

Like the Lytro camera Focus Twist takes square photos that users can refocus after they take the image. The app does this by taking multiple photos with different focuses and stitching them together. What the image is complete users just have to tap or click on the section they want to focus on to set the focus.

The camera isn’t perfect, however. As The Verge points out, developer Arqball recommends that users put one image in their image very close to the iPhone camera, about 3.5 inches away is best. That’s because of the limitations of the iPhone camera that doesn’t have great depth of field. 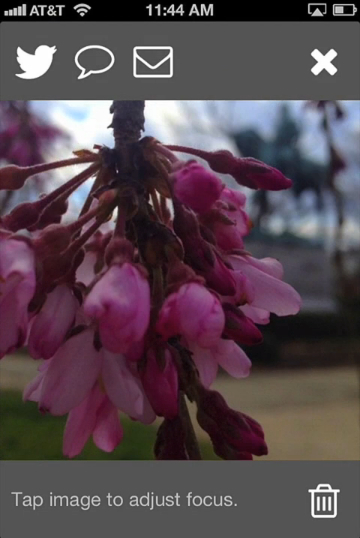 Focus Twist also requires that users hold their hand steady for a few seconds as it take all the photos and stitches them together. The app does use technology called D-Shake to align images after they’re taken, but it’s done on the company’s servers and may take some time to fix photos.

The app will let users share images with their family and friends on Twitter and Facebook. Images, called twists, are all stored in a gallery in the app for easy viewing and sharing later. The app also features a feed of the best twists from users. The app doesn’t try to create a new social network, it just displays great twists that users tweet from the app.

Focus Twist likely won’t replace the Lytro Light Field camera for everyone, but at $1.99 it’s the most affordable option for taking images with multiple depths of field.