I’ve been evaluating and trying out some new devices lately (and getting ready for a new round of evaluations soon.) So, I thought it would be a good time to do some follow up on the Gateway E295/C-140X Convertible Tablet PC. 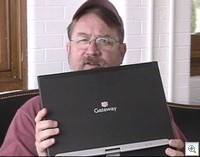 If you’re looking for a desktop replacement with Tablet PC functionality, I think the E295/C140Ã¢â‚¬”X would more than serve your needs. (Make sure you check out the InkShow on The Gateway E295/C-140X) In fact, within that desktop replacement context, I think this convertible Tablet PC is a real winner. Everything I threw at it these last several weeks handled just fine. I’m impressed with the Inking and kudos to Gateway for abandoning the FinePoint digitizer in favor of Wacom. Given my schedule I never did install Vista on the device instead sticking with XP. That was a factor of time more than anything else. I would imagine the Tablet PC experience would be even better with Vista’s Tablet PC improvements.

I’ve stated many times that I’m not a widescreen Tablet PC fan. That said, after few weeks of usage I’ve come to really enjoy the 14Ã¢â‚¬Â WXGA screen on the Gateway. Going back to a 12Ã¢â‚¬Â screen leaves me wanting more on some occasions. I’ve always seen the appeal of the widescreen models, but I don’t think they make much sense in my mobile environment. As a desktop replacement, however, that is another story. 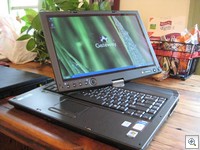 As I said in the InkShow review the 8Ã¢â‚¬”cell battery booted up showing about 5.2 hours available. In practice I was getting about 4.4 hours using Power Optimized settings. Switching to the 12Ã¢â‚¬”cell battery, I was able to stretch that to almost 7 hours which is impressive. If I were going to purchase this device as a desktop replacement, I’d opt for the 12Ã¢â‚¬”cell. The extra weight isn’t going to matter much in that case.

Although the Gateway stayed on my desk most of the time, the few occasions I did put it into slate mode left me wishing that they had included an auto-rotate feature for the screen. Sure the button is easy enough to push, and I’m sure I’d get used to that over time, but I do miss being able to auto-rotate the screen.

As I said earlier, if you’re looking for a desktop replacement with Tablet PC features, I don’t think you have to look far beyond this Convertible Tablet PC. It has enough power and functionality to handle most needs. If my life and work style were a bit more deskbound I could see myself shifting my scenario and using the Gateway in just this way with a UMPC when I needed to go mobile.