Ford is showing off a new Ford Edge Concept at the Los Angeles Auto Show with a beautiful looking interior and Range Rover inspired exterior with a lot of cool new tech inside.

The Ford Edge Concept, which AutoGeeks shares more about, combines a new look for the popular Ford Edge with automated driving technology such as self parking and obstacle avoidance systems which Ford says is a look at the future of a fully autonomous (aka self-driving) vehicle. 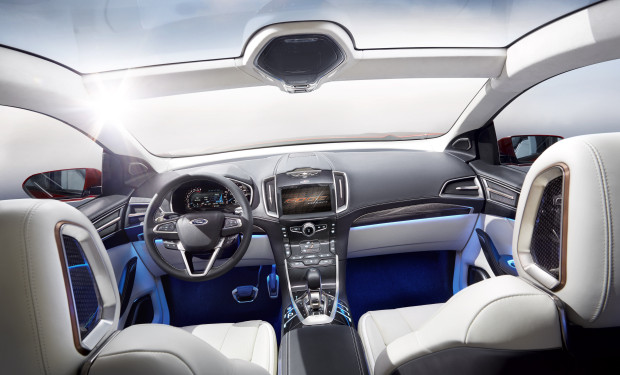 The Ford Edge Concept shows the future of a self driving Ford.

The Ford Edge Concept can also detect slow moving and stationary objects int eh vehicle’s path and warn the drive or even steer away, and the Edge Concept includes Adaptive steering which Ford says will make steering easier at slow speeds and more confident all around.

“The rate of change in vehicle technology right now is unprecedented,” Raj Nair, Ford group vice president of global product development states in a press release, adding, “Our engineers around the world are advancing the systems that will ultimately help make drivers smarter, safer and more efficient. From advanced engine systems to collision avoidance and automated driving systems, Ford will continue to lead in delivering the technologies consumers want and need.”

There’s no word if a production version of this Ford Edge Concept will finally bring MyFord Touch AppLink Support which Ford says is in the works. 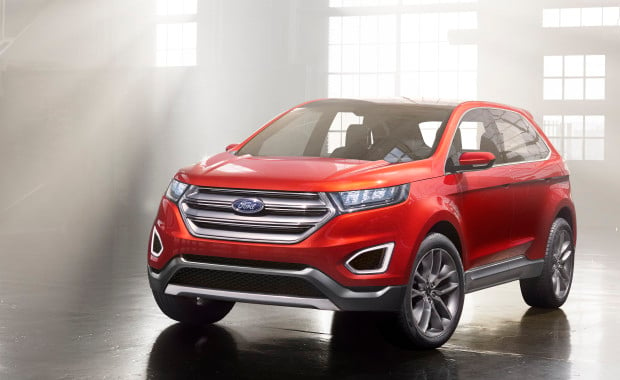 On the exterior, this Ford Edge concept shows big wheels, a dominating grille and an attractive design. It’s not as futuristic as the Ford Evos concept we saw in 2011, but it does provide a glimpse at what a 2015 Ford Edge might look like, at least in part. Chad Kirchner of AutoGeeks writes that we can expect some of the luxury features to head to a Lincoln MKC and MKZ, and that the production Ford Edge will likely be a “slightly tamed-down” version of the Edge Concept.

The video above shows off the Ford Evos concept, which inspired some of the looks and styling of the Ford Fusion. We reviewed the 2013 Ford Fusion, which doesn’t bring all of these features, but it does come with an aggressive front grille that we first saw on the Evos concept.