When Ford introduced the Fiesta for the 2011 model year, it introduced a new feature to the Ford Sync platform: AppLink.  AppLink is a technology that allows you to connect the phone to the car and access advanced controls for certain apps. The apps that support AppLink on your phone can be controlled by the radio controls, steering wheel radio controls, or voice commands on the Ford vehicle.

Although slow at the beginning, support for AppLink is growing. And Amazon’s Cloud Player is the latest to gain support for the AppLink system. 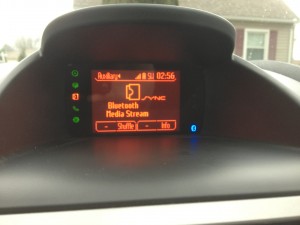 The advantage of the Cloud Player is that your entire music library can be streamed to your vehicle, and controlled by voice. Commands available will be “Play,” “Pause,” “Previous Track” and “Next Track”. Amazon also states that there will be direct playlist support as well. Ford’s AppLink API allows for an app developer to all his or her app to be controlled by voice or physical controls (or a combination of both).

Amazon Cloud Player joins the ranks of Pandora and Stitcher in the AppLink and in-car entertainment arsenal. This, in combination with HD radio, Sirius satellite radio, terrestrial radio and even CD audio, adds to the entertainment possibilities in a Ford vehicle.

Compatibility for Amazon Cloud Player (and AppLink in general) is presently limited to all non-MyFord touch enabled vehicles. When asked last year if AppLink support would be coming to MyFord touch, Ford’s customer service division responded with:

@josh_smith Our engineers are working to expand this feature, but I can’t speculate on timing…

With the large numbers of Ford and Lincoln vehicles that are now coming standard with MyFord touch, expanding this functionality to those vehicles as well will allow for even more people to take advantage of AppLink and encourage the app developers to pursue this platform.